After starching up the first batch of tea-dyed crochet dispersant, I realise I really have to stop describing them as spheres.  They are lumpy, misshapen, blobby globules with little in common with actual sphere shapes. But to me they are beautiful, especially en masse. Each one is unique with its own wabi sabi character.  They are like tiny crayfish pots or loosely woven baskets and obviously handmade. I'm very pleased with my globules of dispersant.

I've also been surprised by my globules. How I get them from flat to round is with a homemade starch mix, not dissimilar to the wheat paste glue I use to make books.  To hold their shape while they dry I stuff them with short-staple wool from an old pillow.  It turns out that when I go to pick out the wool from the dried-stiff globules its almost impossible to remove all the wool, and strands of fluff line the insides like ectoplasm.

Or snot, which is just the effect I want, because the dispersant used in the Gulf of Mexico oil spill, Corexit, once mixed with oil and floating in the water is colloquially called snot.  Back when I thought I was making spheres, I feared they would look too sweet and bubbly to adequately represent the horrors of dispersant's impact on ecosystems and human health. My globules are still pretty bubbly, especially from a distance, but this unexpected snotty quality, combined with the lumpy shapes is very pleasing.

I'm nearly half way through crocheting my 400 globules, and though the tea dying is quick and easy, the starching, stuffing and unpicking is very laborious. I pick as much of the wool filling out of each globule as I can, using a pair of long, medical tweezers. Its a good thing I'm so pleased with how they are turning out because I'm going to be spending a lot of time picking at snotty globules over the next few months.

Posted by Meliors Simms at 5:36 pm No comments:

I've got a couple of large scale oil spill works on the go. Pressing hard at their heels are some mining works I've got planned, just waiting for confirmation on deadlines before I reassess my stitching priorities.  There's nothing to show for those but sketches and notes so far, but they are what occupy my minds eye most compellingly right now.  Occupying my hands however, is "stitch oil, black and white" as the notes in my daybook record day after day. 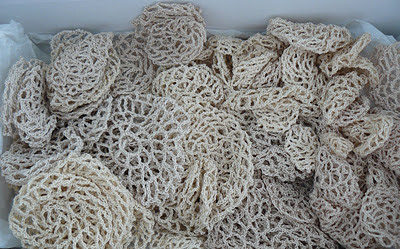 The first oil spill work is an installation of about 400 crocheted cotton spheres of various sizes. I've finished about 160 so far. Because my policy is to, as far as possible, use second hand or waste materials my selection of crochet cotton is quite variable. Different weights and shades, different types of spinning and possibly different materials- its hard to know if any of my cotton isn't all cotton because almost none of the balls have labels. I'm having to use a lot of white because I keep running out of the ecru. 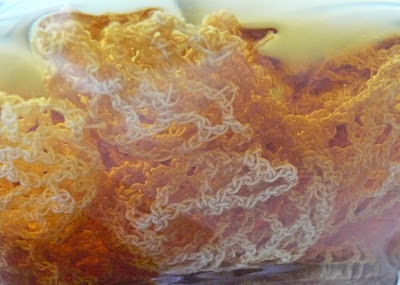 Anyway, to try and bring some harmony to this motley ensemble of spheres I will spend some time this summer dying them with tea. Here was my first serious tea-dying experiment. After the tea dying comes the much more fiddly work of starching floppy net bladders into shapely spheres.

The intention is to represent oil dispersants such as Corexit which was heavily used on the Deep Water Horizon oil spill in 2010 and briefly used on the Rena oil spill in the Bay of Plenty NZ this year. Dispersants are much more toxic than oil but have the attractive (to oil companies and politicians) ability to make oil spills invisible by breaking the oil down into plankton sized blobs and distributing it through the whole water column. Great for dodging fines based on the amount of oil recovered, not so great for the eco-system and human health and local economies. 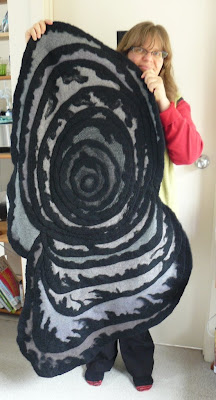 Here I am holding up my big black spill (working title) which is about half of its intended finished size. Its the currently same height as me, 155cm or 5'0", short for an adult, big for a hand stitched piece.   I wrote about starting this one in a blog post about cutting the paper pattern and blanket pieces? So far I have felted and stitched about two thirds of the fabric I cut that day when I ran out of grey blankets.  Since then I have managed to acquire three more which should be enough to see this work spreading down the wall and across the floor of the gallery.
Posted by Meliors Simms at 9:16 am No comments:

100 years since the first person at the South Pole 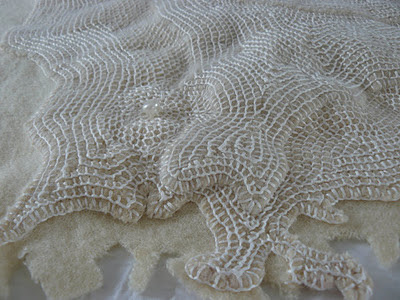 The South Pole on My Antarctica (shown here while still WIP) is marked with a small pearly button
"So at last we reached our destination and planted our flag on the geographical South Pole, King Haakon VII's plateau. Thank God! This took place at 3pm. Weather was the best when we set out this morning but at 10am, it clouded overand obscured the entire sun. Fresh breeze from the SE." Roald Amundsen
Today is the centenary of Amundsen's historic achievement, being the first person to visit the South Pole, along with his four companions and 18 dogs. Amundsen is one of my heroes (along with Captain Scott who arrived a month or so later- I don't think we have to choose one or the other to admire).
Roald Amundsen is an inspiring example of single-minded focus on a lifelong dream. He did years of intelligent preparation including learning from the Innuit in the Arctic as well as other polar explorers and he employed the very latest technology available. His success is remarkable not only for reaching the Pole first, but for getting his entire party back alive, a feat that Scott tragically failed.
During the months I spent hand embroidering the continent of Antarctica I read and reread a lot of Antarctic literature and learned much about Amundsen. Pulling my needle in and out across the contour lines of the Axel Heilberg Glacier and across the polar plateau was a way of honouring this extraordinary man and the journey he started out on with seven other men and 86 dogs. Most of the dogs were killed for food along the way, and I wrote a poem for the dogs, because somehow Amundsen (like Scott) has proved too great a subject for me to write about,
Posted by Meliors Simms at 11:40 am 1 comment: 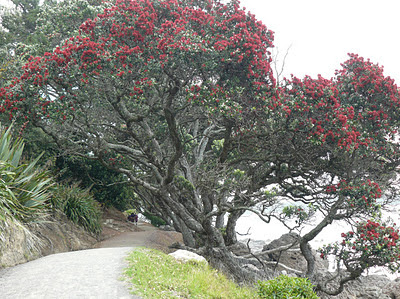 Pohutakawa bursting into bloom at Mount Maunganui
I first heard about the Kermadec artists' voyage on the radio just after the artists returned from their trip. My ears pricked up because I've been thinking for a while of making the Kermadec Trench out of blankets. The nine artists who participated included one of my favourites, Robin White, which made it even more special. Throughout the year I've been looking forward to their show.
The project involved a week's sea voyage in May across one of the least travelled bits of ocean on the planet. The work the artists have made since their voyage is now on exhibition in the beautiful Tauranga Art Gallery and I went to see it on Sunday.
Because I don't have my own car getting to Tauranga is tricky, so I formulated a cunning plan. To celebrate my birthday this week I didn't have a party or a dinner, instead I invited some friends on a day trip to the seaside with some art thrown in. Five girlfriends joined my little expedition and car pooled over the Kaimais to Tauranga. We all loved the exhibition, and went round the show several times, including after a break for lunch.
Robin White produced three enormous tapa cloths (I would guess at least 5m square) that hang in the main foyer of the gallery, filling the two story high walls. My jaw literally dropped when I saw them so big and so beautiful. Two of the tapas marked with Robin's characteristic precise and insightful drawings made using traditional techniques and the involvement of a village craft group in the Islands. They are gorgeous and perfectly sufficient on their own, but my favourite was the tapa with just two blocks of colour, ash black and ochre red, no images at all. In its simplicity, the work's strength is quietly insistent.
The other eight artist's included a couple who's work I'm familiar with and others I haven't come across before. The works by two of the other women on the trip resonated with me the most: Elizabeth Thompson and her extraordinary undulating deeply coloured pieces, very sensual and evocative of Kermadec's environments. Fiona Hall's sculptures and installations were stunning. I particularly liked the tiny screen (iphone?) playing inside a sardine can framed by a perfect tin fish. And her sculptures of bird beaks like icebergs of course.
The exhibition is on until February 2012, so if your NZ summer holiday itinerary includes the Bay of Plenty I strongly recommend going along to the Tauranga Art Gallery to see it. 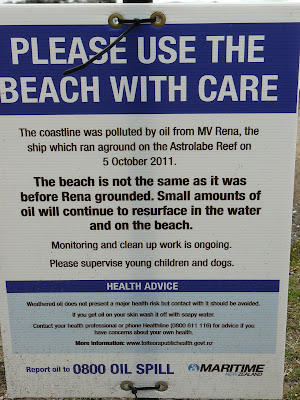 After we had filled up on art and lunch our little party drove on to Mt Maunganui, where the sea was wild and the air stormy. Dozens of black-wetsuited surfers bobbed off shore and beyond them a flotilla of small yachts raced. It was too windy to sit on the beach and we walked around the base of the Mount, following the track I used to find traces of oil spill in October. There is still some oil on the rocks and evidence that the clean up operation is by no means complete. Next day I found out that the storm had caused the wrecked Rena to spill more oil into the sea, which has probably washed ashore by now.
The rain mostly held off for our walk, but started in earnest as we approached the hot pools. A consensus decision decided we should go for a soak, a truly blissful way to end a wonderful excursion. 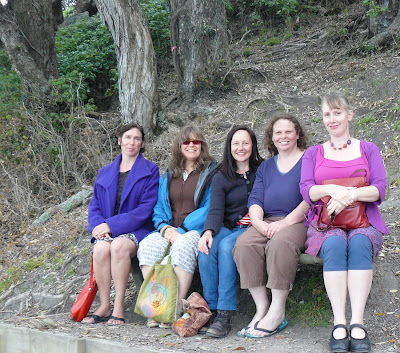 Windblown and exhilarated, Stephanie, Meliors, Rachelle, Robin and Anna resting on our walk around the base of Mount Maunganui
Posted by Meliors Simms at 3:46 pm 1 comment: 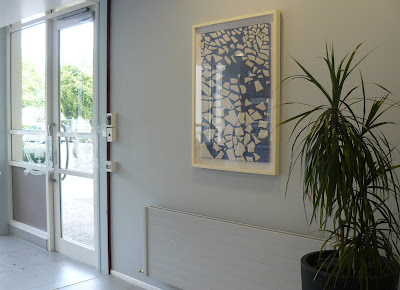 The University of Waikato bought my large embroidered appliquéd blanket piece, Tipping Point, from the Imagining Antarctica exhibition. I didn't know what they had decided to do with the work until a Facebook friend mentioned how much she was enjoying seeing it in her work place, B Block at the University. That afternoon I caught a bus to uni and found my way to the top of the hill, near Silverdale Road.
B Block is the Administration block, so more used by staff than by students (in my six years of study at Waikato, I entered the building only a couple times) . As I approached I could already see Tipping Point's strong contrasting geometry through the glass doors. The familiar nervous excitement I feel whenever approaching my work in a public place started fizzing in my tummy. The piece has prime spot in the reception area and looks very nice against the pale blue-grey wall.
This is currently the most easily accessible of my pieces*. Anyone can go into B-Block so if you are in Hamilton swing by Silverdale Road and pay a visit. 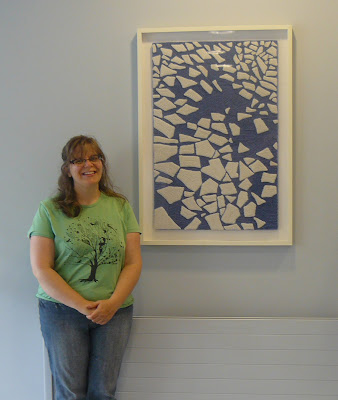 *My Antarctica (Ross Island) is also in a public collection, at the Waikato Museum but is not on view right now. Several of my handmade books are held in the Special Collection at the Auckland City Library, and can be viewed on request. And of course you can click the Recent Works link near the top of this page to see photographs of recent work including some held in private or public collections but most available for sale now.
Posted by Meliors Simms at 12:50 pm No comments: