I mentioned a couple a months ago that I have done an about face in my attitude towards home owning. It seems that I am in the process of overthrowing a number of prejudices that I once fiercely cherished and defended. Today's demonstration of this phenomena involves swimming.

Like many kiwi kids I was given formal swimming lessons and by about 7 or 8 years old I could manage a length or two of the school pool in a thrashing motion that bore some vague resemblance to the crawl or sometimes breast stroke or back stroke. I liked hanging out at the public swimming pool across the bridge from our house, but I didn't really do much swimming there, mostly just solitary play, imagining myself as a synchronised swimmer making endless somersaults in the water.

By high school my aversion to sports of any kind was pretty much complete, wearing a swimming suit was a source of humiliation, and my long, thick hair weighed a tonne when wet and took at least 4 hours to dry. So all in all, swimming became a rare and not very attractive activity. There was a brief interlude of early motherhood when taking my daughter to the pool was an excellent thing to do, but sitting in the toddlers pool doesn't really count as swimming for grown ups does it?

Fast forward through a couple of decades of excuses (I don't like the chlorine, the water's too cold, I won't have time to dry my hair properly etc) to January 2007. I had spent New
Year's Eve alone with a hole in my foot from falling on a pronged garden tool that afternoon. For the next two weeks I avoided walking, usually my main exercise, and while I was lying around I brainstormed alternative exercises that wouldn't involve my left foot in any weight-bearing commitments. The idea of swimming swum up from the depths of my imagination, and somehow avoided being snagged on all the reasons I didn't like it. Helpfully, the weather in Northland this month is exceedingly hot, and the idea of immersing myself in a cool, refreshing body of water suddenly had unprecedented appeal.

I found an enthusiastic buddy (with spare goggles), a mutually convenient time and made my first visit to the public pool in Whangarei. I swam six lengths of the 25 metre pool that day, with plenty of rests in between. It took a few lengths before I remembered how to co-ordinate breathing with all the arms and legs flailing about, but eventually it got easier. I was so satisfied with the experience that my buddy and I made a regular swim-date. The second visit was harder work somehow but I made it to 11 lengths (over 1/4 km!) and have set a goal of 16 for next week.

Yes, the chlorine is yucky, yes my wet hair is like wearing a horse on my head for the rest of the evening, yes I'm self-conscious about my hirsute thighs and flabby torso... but now the pleasure of of moving through the water towards my goal of increased fitness carries more weight.
Posted by Meliors Simms at 6:33 pm No comments: 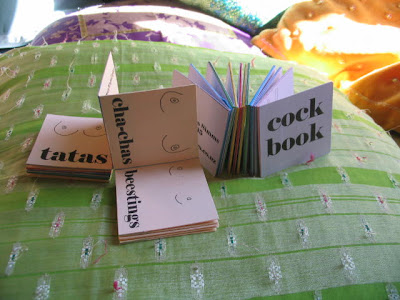 Back by popular demand!
Always good for a giggle, the Bo*b Book has been out of stock for ages because I had misplaced the master copy and couldn't make any more once they sold out.

For new readers unfamiliar with this book of mine read here for more a detailed description.
Loyal readers will remember this playful, toylike celebration of breasts, and its even more educational brother, C*ck Book. Both are available at Tuatara on Bank St in Whangarei or at a special blog-reader's price of only NZ$25 inc p&p if you order contact me directly.

Posted by Meliors Simms at 11:34 am No comments:

Email ThisBlogThis!Share to TwitterShare to FacebookShare to Pinterest
Labels: books, Look what I made

The theme for my 2006-07 summer is packing, which I have been doing pretty much continuously for the past month. At Hukeranui, at work, at Te Horo... for moving, for storage, for travelling, for constantly evolving situations that are keeping me on my toes. Frankly the packing part is getting a little old but no doubt there is some important karmic lesson in all this that will come clear in retrospect, once I finally achieve my ultimate goal of staying in one place for good, or at least years, with all my things there with me (not in boxes scattered hither and yon).

I recently did my annual tarot reading for the coming year. The card in the signifier position (where I'm at right now) was 4 Stones (pentacles) which Carol Bridges summarises as 'basic survival'. "Oh yeah!" I wrote in my journal when I saw it. At this time I'm looking after all my needs very adequately and am making satisfactory progress towards achieving my various goals but I'm not putting much energy into everything else including blogging, emailing, telephoning etc.

It looks like I will be a bit more settled, and at least partially unpacked, by late February but until then I suggest you maintain low expectations of Bibliophilia (and other forms of communication from me). Readers inclined to worrying about my well-being (I know who you are!), please don't. I am happy and well and having fun being agile.
Posted by Meliors Simms at 9:18 am 2 comments:

Email ThisBlogThis!Share to TwitterShare to FacebookShare to Pinterest
Labels: home

A highlight of my recent visit to Wellington was visiting the Karori Wildlife Sanctuary. There is always something new to see there and this time it was the two tuatara. This was my first encounter with them 'in the wild' (not inside) and I have subsequently decided that I have finally identified my totem animal. I am actually a tuatara. Like them I don't really move very fast and I like to be warm.

One of my companions on this visit was my nearly-five year old niece, Zita who was also a huge tuatara fan. She would happily have spent the whole time squatting down and watching them doing nothing at all except that most of the older and all of the younger members of the party had much shorter attention spans.

Zita is refreshingly unsqueamish about insects. She loved the weta hotels at the Sanctuary and told me that her favourite insect is a cicada (though butterflies are good too) and her least favourite is a bumble bee. Her mother said she can spend hours watching ants on the concrete path.

When I finally returned to Hukeranui, I found this weta watching paint dry under its feet. This photo is for you, Zita.

Posted by Meliors Simms at 5:58 pm No comments: