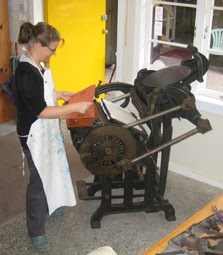 I don't know if you can tell, but I am grinning all over my face in this picture. I have just pulled my first successful print off the 'Arab', the platen jobber press, the real letter press machine that I have been itching to play with since I first laid eyes on it. The time was right today: I finally felt I'd learned enough about printing and presses to be pretty confident I wouldn't break anything if I had a go without supervision, and thanks to Al the whole machine was shiny clean inside and out.

First I extracted the chase from its bed, and laid in some simple text. Then I re-inserted the chase and inevitably, it wasn't as easy to put back in as it had been to take out. But I got there with some judicious wriggling and a little light banging.

Then I smeared some oily black ink onto the ink disc and started pumping the treadle to run the triple rollers through the ink. Tui, who was doing accounts in the office came out at this point to investigate the dulcet tones of the industrial age, and quickly made an adjustment that got the disc turning so that the ink would spread evenly across the rollers.

Then I fiddled about with the tympan paper which was pretty dusty and yuck, so I covered it with some clean paper and then started trying to figure out how to get the paper to meet the form. Tui and I tried slipping a range of unsatisfactory packing materials between the tympan and the platen but it wasn't until Neil arrived that the simple, elegant throw off mechanism became obvious (doh!).

I am quite infatuated with the Arab and its simple, honest, strength, speed and accuracy. I'm sure I will love it even more when I have found a frisket and gauge pins, a bodkin and tweezers, some more quoins and a quoin key... and who knows, maybe even the brake!

But for now I am simply seduced, the way I have been before by certain other machines I have known intimately (a card folder in Boulder; a trench digger in upstate New York; the long honeymoon with my first food processor [hummus! peanut butter!]). Strangely I have never felt even remotely attracted to a car or a bicycle or a computer. I admit to being very fond of my cell phone and to yearning for an MP3 player, but no shiny electronic gadget has ever appealed to me as much as this old mechanical piece of cast iron.

PS If you want to see a wonderful photographic demonstration of letterpress in action (and lots of gorgeous and interesting art works) check out Aimee Lee, a performance and book artist based in the United States 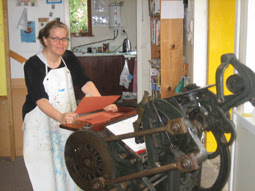 Me and my sweet Arab
Posted by Meliors Simms at 7:01 pm 4 comments: 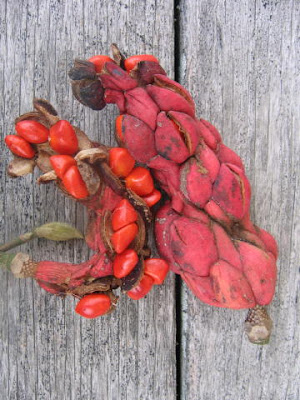 As you know I am a big magnolia fan and last year I announced the winner of the first annual Magnolia of the Year award. But it has recently become clear to me that I haven't really been paying attention to magnolias except for the obvious showy flowering season. I never knew they also have fabulous fruits, photographed here by Al. In my own defense, I think they don't fruit every year or surely I would have noticed them before. The wax eyes, grey warblers and thrushes have been waiting for this big event and are holding a magnolia fruit festival in the backyard of our current housesit, where one tree is incredibly heavily laden.

They are feasting on fruits that look like a cross between a purple kumera tuber and giant red raspberry. Each raspberry coloured nodule on the ripe fruit eventually bursts open to reveal a fiery orange berry, shaped like a pomegranate segment but opaque and glossy. These berries dangle enticingly from a fine yet strong white thread. Inside the thin skin is a juicy, creamy, citrus-scented flesh surrounding a large seed looking like a shiny black valentine.

I ask you, how much better can this tree get? Well, according to Megan, who is a scientist and should know, they are a prehistoric tree that has been doing their glorious thing for millions of years. Makes me glad to be able to take a turn as a resident of Planet Earth. 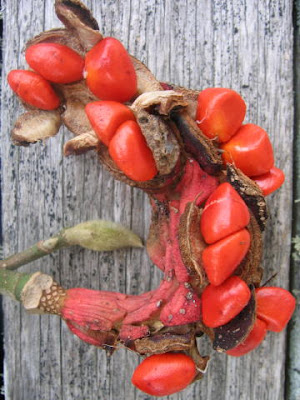 Posted by Meliors Simms at 11:00 am No comments:

I have always felt a tinge of shame that before I started making artist's books, one of my favourite pastimes was doing jigsaw puzzles. Jigsaws are so uncool and so pointless (at least cross stitch provides a finished product or television viewing provides cultural connection). From the very second I made my first book and knew I had found my calling, I dropped jigsaw from my life like the unneccessary time filler it was.

Not that I have got anything against puzzles. Sometimes in Classics bookshop I wistfully admire their high end jigsaw selection. It's just a matter of priorities. A good jigsaw puzzle experience occupies twelve or more hours and half a dining table. Since devoting my hours and table space to book making books is even more absorbing, challenging and fun than puzzling; and eventually might I end up with a finished book that I am really pleased with and sometimes other people admire and even want to buy... jigsaw puzzles lost their place in my life.

However typesetting, to my delight, turns out to have bit in common with putting together jigsaw puzzles. Just as important as getting all the letters to print in the right order is arranging the white space around the words. And that means filling in the chase (frame) with blocks of wood and strips of metal of varying sizes and shapes, wedging them so tightly that there is no chance of a slippery little lead letter shifting about during the printing.

As I sat there Friday afternoon, trying different pieces to see if they would fit around my LANGUID text, I finally felt that I had something to show for all my years of jigsaw puzzling: a well tested capacity for the patience, persistance and patterning inherent to typesetting. Not to mention being able to find it an enormously pleasurable activity.
Posted by Meliors Simms at 6:59 am 2 comments: