I may be some time My paid job goes full time for a couple of weeks.
I'm not sure I'll want to do much blogging in my own time.
Posted by Meliors Simms at 4:25 pm 1 comment: 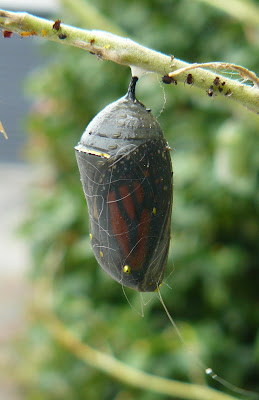 Every day I go outside and collect the ripe feijoas that have fallen from the neighbour's tree onto this side of the fence. The feijoa tree happens to overhang the swan plants which have been nursery for many new butterflies this week. 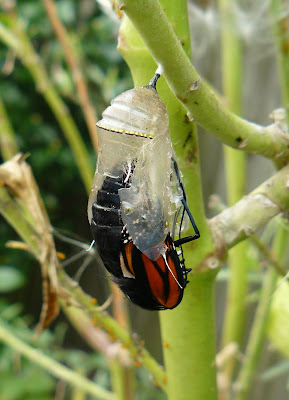 One morning I spent nearly an hour watching the first one stretch itself out into autumn air. I love watching their wings go from crumpled to smooth as their bodies shrink proportionally. 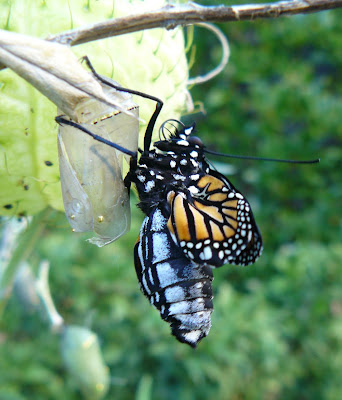 Today I found a butterfly upside down on the concrete below. I think it was knocked off of its perch by a falling feijoa. I righted the butterfly, so it could crawl away, but its wings were bruised and bent, so it will never fly. 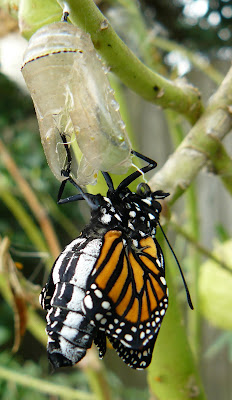 I started working on the final contour of My Antarctica this afternoon. It's a little nerve-wracking and I've been putting off starting it for a few days. To begin with, I'm unpicking a bunch of islands that I chain stitched about five months ago, when I had only cut out this first contour, and didn't have my now-singular vision of an entire continent of blanket stitch. 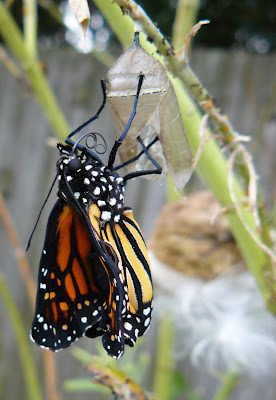 Unpicking involves first basting around the outline so that I know where to put the new stitching afterwards. Then I carefully snip the top of each stitch and pull the threads out very gently with long surgical tweezers. This particular blanket is a bit thin and loose, and unpicking with less than absolute attention leaves a slightly threadbare patch which doesn't have enough substance to carry the replacement stitching. So it's anxious work. 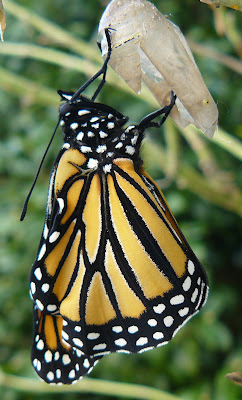 My Antarctica is currently occupying most of my tiny studio/home. I won't attach the sea level contour to the rest of it until I have taken care of all the islands, so there are two huge pieces of blanket which need to sit flat and separate. Everything else in my life is kind of scrunched up around the edges of the work. I'm used to living so tightly that every object has to be tidied away as soon as I've finished using it, but now every activity (eg going to bed or getting dressed) involves rubic-cube like rearrangement to achieve.

I think maybe, after I finish with My Antarctica, I'll make some small embroideries: lap-sized, hoop-sized, brooch-sized.... I have lots of ideas for what to do next, but no one of them can become compelling while Antarctica is occupying all available space. 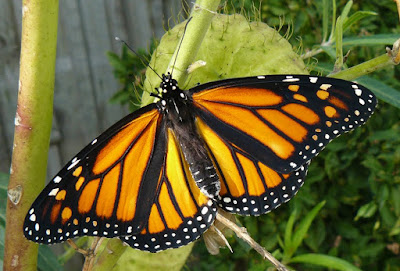 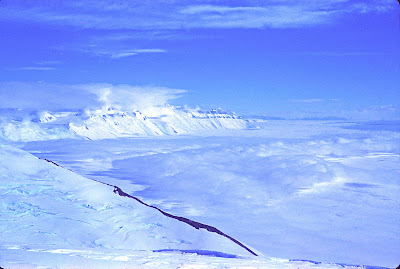 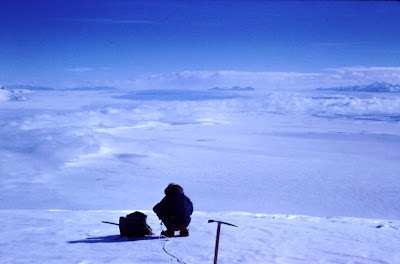 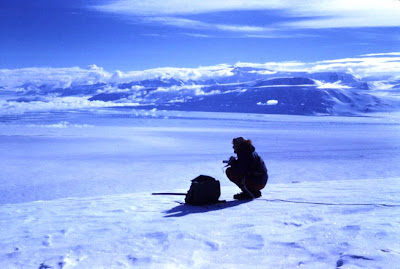 A blog reader, Barry Smith, who has been following the progress of My Antartcia, recently sent me these photos that he took of the Beardmore Glacier in 1959. He says, 'we were part of a NZ Alpine Club expedition and spent about four months down there surveying, geologising, biologising and climbing... in mainly good weather.'

Barry took this triptych of photos 'looking up the Beardmore from near its exit into the Ross Ice Shelf. We were the first there since Scott. I was so staggered by its immensity.'

Shackleton was the first to climb the Beardmore in 1908, reaching the Polar Plateau but turning back when just 100 miles from the South Pole. In 1911 Scott used this broad river of ice as his pathway Pole (Amundsen took the then-untried Axel Hiedelburg Glacier as his route to the Plateau).

Thank you Barry, for letting me post these wonderful photographs.

Posted by Meliors Simms at 1:12 pm No comments: 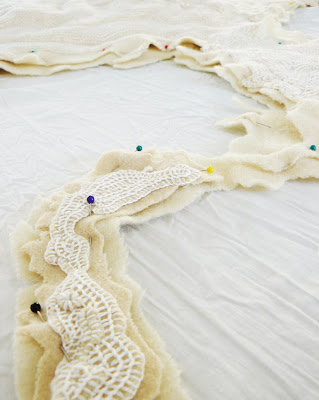 My Antarctic now includes the peninsula, and is finally looking more like itself with the 500m contour. Here it is being pinned together last week, but I've already stitched round most of the steep coast of the continent. Only the shallow slopes of West Antarctica remain, so I'm mentally preparing myself for the final, sea level, contour which I expect to be a technical challenge involving shelf ice and many islands. 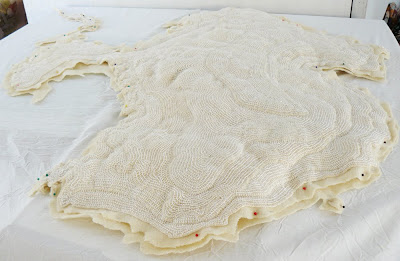 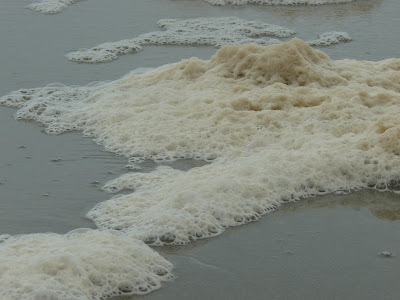 If I were Amundsen I would have stitched my Antarctic contours on a customised industrial machine, after years of patient, careful study to perfect my technique. I would have finished the continent in a week.

Instead, I have stabbed myself in the finger three times this morning and scratched across my chin with a bent needle I should have discarded last night. Right now I am forcing myself to take a break from the blankets and run errands, write this, make some healthy food for later. It feels like a terrible sacrifice to turn my back on Antarctica (even after three hours of pretty solid stitching). The white continent is shining in the afternoon sunlight over my shoulder, a siren song. An infatuation.

Last Sunday the needle slipped so badly my finger bled for a long time and I stopped stitching for three days because any pressure on my finger started the blood leaking out again. If my work wasn't white, blood stains wouldn't have stopped me, but there's a limit to how much watermelon snow I can tolerate. And to be honest, it was a guilty relief to turn away from the project because last week I was full of ambivalence about it. The ambivalence about being almost finished was compounded by writing the artist's statement for Ross Island.

Perhaps if my ideas/ideals were mediated by a machine, or a pieceworker in Vietnam, composing an artist's statement wouldn't involve such heart wrenching self-analysis, I don't know. I only know that I am as susceptible as most children of the mid 20th century to vilifying Scott, but the more I think about my own practice, the more I identify with him, or at least his legend.

The legend of Scott made a virtue of inefficiency by glorifying old-fashioned exertion and effort, defining heroism as persistence. The imperfections of Scott's practice were prized in the early 20th century, in much the same way that in Japan, the "imperfect, impermanent, and incomplete" qualities of wabi sabi are valued by connoisseurs of traditional Japanese beauty. "Characteristics of the wabi-sabi aesthetic include asymmetry, asperity, simplicity, modesty, intimacy, and the suggestion of natural processes."

The visible flaws in Japanese wabi sabi design show show human hands at work. My own entire artistic practice, from handmade books to letterpress printing, from crochet coral reef to embroidered continent has made a virtue of slowly handcrafting what is usually done by machines in this age. And although I always make my best effort, I don't wait until I have mastered a craft before I start into an insanely ambitious project. Thus my work is full of imperfections, my craftsmanship is incomplete and my dedication is impermanent.

I don't see these as heroic qualities. And yet, I think the imperfections of my craftmanship say something important, that needs to be said today, exactly one hundred years after Scott was saying something similar in his choices on his last expedition. Efficiency is a virtue, but it is not the only virtue. Dragging my needle in and out of old blankets; stomping through snow pulling a sledge: these are not the most efficient methods to achieve our goals, yet their symbolic value should not be dismissed any more than the intrinsic satisfactions of physical work. It is uncomfortable to write this, perhaps because the legend of Scott's wabi sabi was serving an Empire of inequality.

My Antarctica is offered to a conversation about curbing climate change by recognising that the comforts of industrialised consumerism are unsustainable. This cannot and should not be an easy or quick conversation and I don't want anyone to mistake my contribution for glib or slick. And that is discomforting because I've always felt embarrassed about being earnest, because I would rather be seen as cool.

Last year after the 'scandal' of the National Contemporary Art Awards I quoted Brian Eno, saying the good thing about art is… it doesn’t matter what happens , it’s not dangerous, it’s not life, if you don’t like it you can switch it off, or rent another DVD. Art is something we deliberately let ourselves enter into because we know we can take some mild psychic risk. (keynote address, Luminous Festival, Sydney Opera House June 2009).

With My Antarctica, I have upped the ante of psychic risks to which I subject myself. Yet these amount to a few pricks and scratches, some intellectual tossing and turning, a bit of angstful soul searching. Yesterday, having finished the artist's statement and sent in my 2010 NCAA entry, I picked up a new needle and returned to My Antarctica with fresh passion. Over and over again I survive the psychic risks of making art. Over and over again, I am embraced by art's psychic rewards. And fortunately, no lives are threatened by my polar explorations. 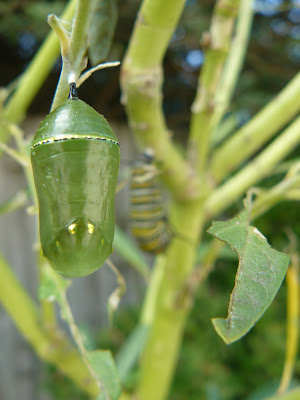 For the past week or so I have been observing with interest the action on our swan plant. Caterpillars eating and growing and then hanging upside down and turning into beautiful cocoons whenever I'm not looking. The cocoons start out light bright green and darken to emerald studded with gold beads. I haven't seen any butterflies yet, but I'm watching. 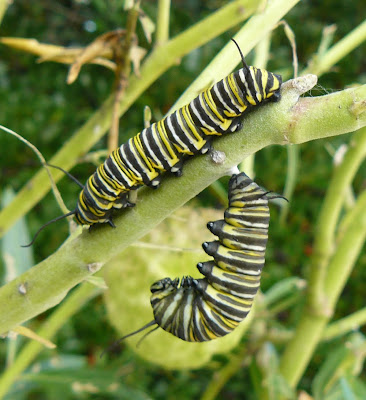 The only thing that these photos have to do with the following poem is that they were made last weekend. The poem resulted from a writing game shared with a group of local writers who meet to eat cake, drink tea and write together on a Sunday afternoon. This piece was the result of pulling 5 random words out of a hat and spending a few minutes trying to compose them into something I like. Can you guess which of the five words were from the hat and which ones I chose for myself? 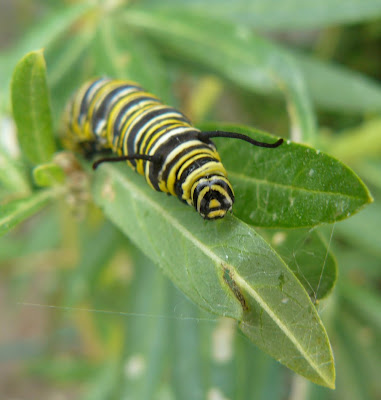 She has fashioned a jest
from embers, from ashes
flinging words like sparks
out into the dark
laughing until she is soupy inside
delirious, feelings rising like smoke
until her rimu heart bursts into flames.
Posted by Meliors Simms at 11:52 am No comments:

Looking for a needle in a haystack 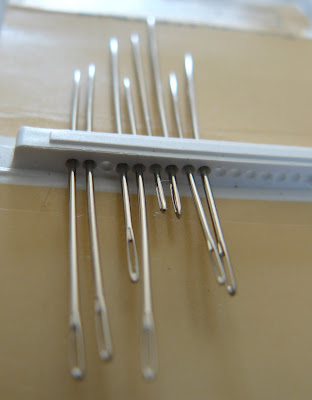 Bent needles
Ross Island has come home from its long sojourn at the framers. It took me months to scrape up enough money to pay for the most expensive frame I've ever invested in. As usual, Sarah at the Framing Workshop has done a superlative job, and I can't begrudge a penny. The frame is so good that I am even overcoming my usual post-completion loathing for my own work. This is useful, as now I have to write an irresistible artist's statement to compensate for the tiny 250kb photo required for an NCAA entry. 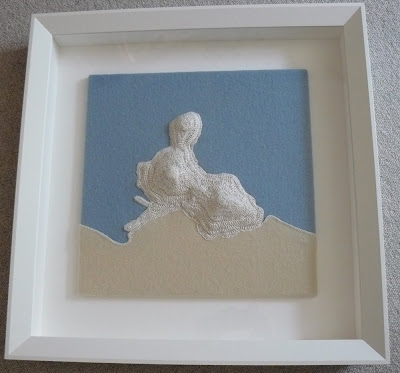 Meanwhile I have finished another contour of the Antarctic continent; slip sliding down those steep slopes to the sea. My thread consumption is not quite so great on these narrow contours but I'm still going through needles quite rapidly. They quickly bend into curves working the heavy layers of blanket and a curved needle is harder to control and more likely to prick and scratch my fingers than a straight one.

I ran out of size 6 embroidery needles, which seem to stand up to my unreasonable demands better than the more common size 8. I visited five different shops before I found a packet of 6's and during the many days of searching I was using up size 8s like they were disposable. I actually snapped a needle while stitching, and my finger tips are shredded. Needless (pun intended) to say I bought two packs of 6s when I finally tracked them down. Thirty-two size 6s should see me through to the edge of the ice shelf 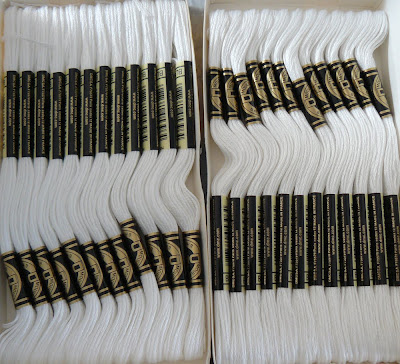