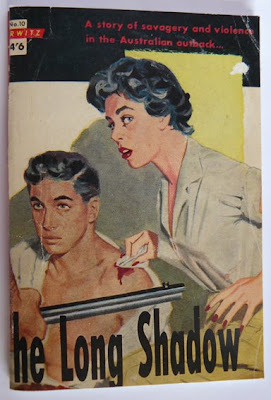 Medium blank book with upcycled pulp-fiction cover
My major personal goal for 2009 is to develop a reliable habit of happiness; to reset my emotional default to positive; to consistently seek and savour joy, minimise misery, and sustain a sense of satisfaction with my life. It's an exciting, enjoyable project to be embarking on.

Some of the tools and resources I am directing towards this objective are mentally rehearsing/remembering pleasant events, choosing a positive spin when I'm talking about my life and putting glittery stickers on a star chart of happy-inducing activities. I have a pretty long happy-list, which includes both learning new things and making things with my hands.

So, learning a new handcraft is pretty much ecstasy for me. Lately I've been experimenting with stitching coils of fabric into vessels, a slow and satisfying process. Which so far has produced this lipped bowl: 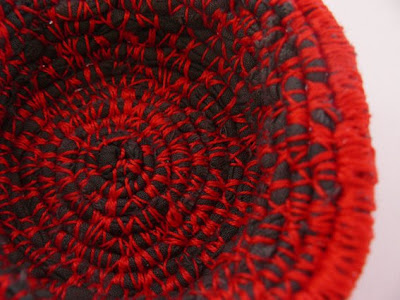 and this asymmetrical lidded pot: 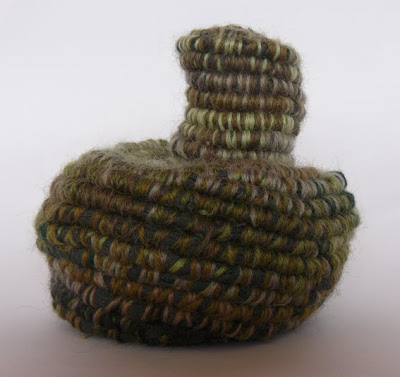 I'm quite excited about the possibilities for making very large objects with this technique, but like so many of the big ideas fermenting in my brain, it will have to wait until I am settled: big work is a liability in my-still transient lifestyle. In the meantime I am fine tuning my skills and my plans on a smaller scale.

I also made a whole bunch of blank books last week. They are hand sewn with 150gsm construction paper: sturdy for drawing, as well as list making or journal keeping, whatever you like to do in your blank books (and I like to do it all). I don't usually bother making blank books (being more interested in creating content), but I just needed a new notebook and it seemed less trouble to make one for myself to search out a good one I could afford. These pamphlet stitched babies are so quick and easy that once I got into the groove they just kept coming, til I ran out of cover stuff. 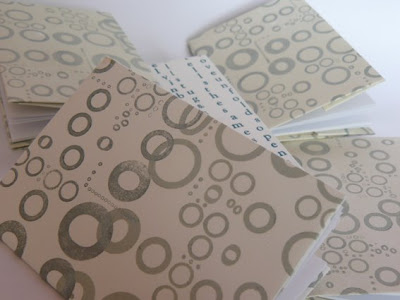 Mini notebooks covered with letterpress proofs
Another of the activities on my happy-list is giving gifts, so in the interests of adding more stickers to my star chart, I've decided to run the first official Bibliophilia giveaway!

I'm giving away a surprise parcel containing a variety of goodies handmade by me, including two blank books and a soft vessel (as pictured above). All you have to do is make a comment on this post sharing three or more of your own tried-and-true happiness resources: things that you choose when you need to get the smile back on your face.

All the entries received by 14 February will go in a hat and someone neutral will draw the winner's name. Plus I will post a collaborative uber-list of sources of joy as contributed by Bibliophilia readers. That's you! This is your chance to stop lurking and make a contribution to increasing the amount of joy on the planet in 2009! 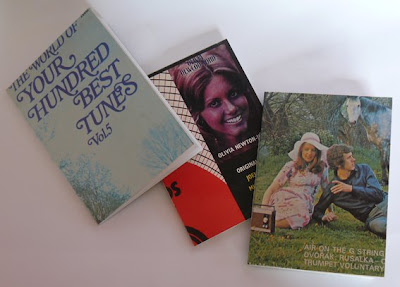 Email ThisBlogThis!Share to TwitterShare to FacebookShare to Pinterest
Labels: books, giveaway, Look what I made

The whole time I was in Australia, I was frustrated about books. When I could find something to read, it was rarely exactly what I wanted to be reading. When I did get a really good book it was over all too quickly (there are disadvantages to being a speed reader) and then I was once again faced with my book drought.

Returning to New Zealand is a chance to dive into a pool of satisfying and stimulating reading. Firstly, a stay with my friend and sister bibliophile, Jo, netted me a small stack of books to borrow. Then a visit to my storage unit allowed me to access a few of the most useful and missed volumes in my personal library. And finally, arriving in Whangarei allows me access to the excellent public library here including its fine science fiction collection.

So, like a starving person at an-all-you-can-eat buffet I have loaded my plate and am circulating my attention between several books I'm actively reading, while looking forward to some treats to come.

Responding to The Water Hole 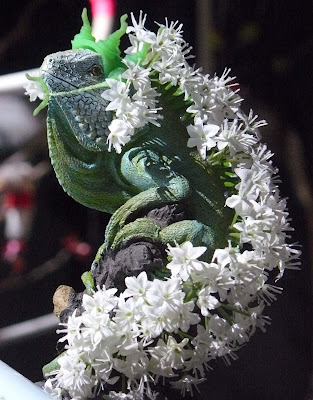 One of the weird little creatures at The Water Hole
One of the highlights of my final week in Melbourne was Shelka's workshops at Medium Arts Space in Brunswick. The best one was called Install it Like You Mean It and involved first visiting an installation at ACCA and then returning to Medium and creating our own installation in response to what we had seen. 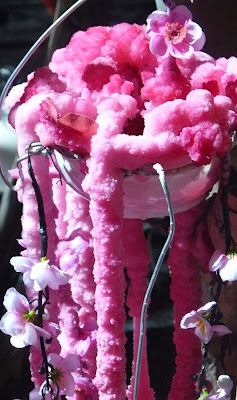 Crystalised fertalizer grows in fantastic shapes and colours across The Water Hole
I'd wanted to see The Water Hole, an installation by Swiss artists Gerda Steiner & Jorg Lenzlinger, ever since I met the artists who have been living upstairs from the Melbourne Museum of Printing for three months while they created this installation. They travel around the world creating large, site specific installations constructed mainly from things they find in each place. The photos on their website give a hint of what their work can look like, but didn't really prepare me for the intense, intelligent and interactive nature of The Water Hole's response to the water crisis in Australia, and Victoria in particular. The review in last weekend's The Age describes the installation pretty well, but also confirms that it such a complex, layered piece that everyone will have a different response to it. 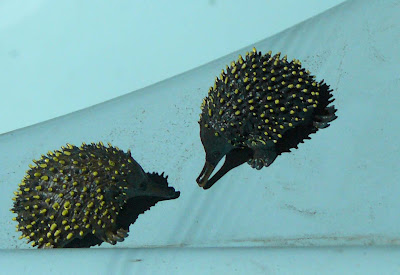 Two tiny echindna meet on the edge of an old bathtub
For me, most powerful and moving part of The Water Hole was the last. After the mysterious anticipation of the long and winding foil and dead-tree tunnel entrance, the exuberantly weird and wonderful chaotic systems of the water hole, the perspective offered by the bird hide, then a swoony waterbed multimedia dreamscape, followed by three horizontal perspectives: lying under a (real) meteorite, lying on a swinging bed, and lying under a water-hole type mobile you come out into a gallery space that feels conventional, aside from the burgeoning side of a foil tunnel billowing into the room. 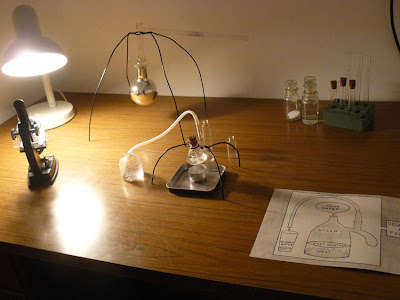 The walls are hung with colour photographs of Gerda lifting people she has encountered on their world travels. The familiarity of perusing a row of wall art and its accessible humour felt like a transition back to the normal world, coming down from an incredible trip. Reluctant to leave I postponed rounding the final corner to what I assumed was the exit, but when I finally did it was a dead end, a tiny nook set up as a scientific laboratory: a desalination plant for tears. Retracing my steps though the whole installation, with the desalination plant for tears on my mind gave me yet another fresh perspective on the water crisis. 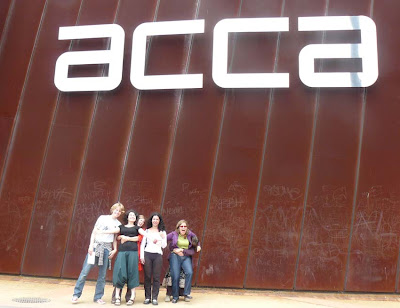 In response to the photographs of Gerda lifting people, some Shelley and I get lifted outside ACCA.
I'm very glad that I got to see such an amazing exhibition with a group of people who immediately set to work trying to manifest our responses. Instead of wandering into the next gallery, or back to work or meeting up with people who hadn't seen it, I got to keep thinking and talking and being immersed in the installation experience for many more hours. 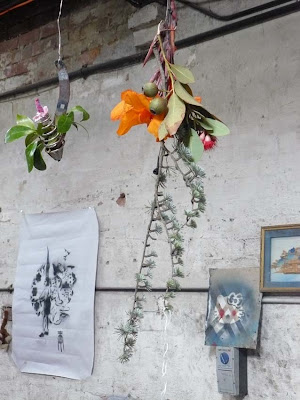 Two of the first bits I made for our installation: releasing the urgent desire to be making with my hands

Back at Medium we pooled the bits and pieces we had been collecting for our installation: litter, shrubs, fabric, discarded appliances etc. Mostly each of us was working fairly independently, creating small elements that responded more to the style of The Water Hole than its content, but as the afternoon wore on and we became more concerned with integrating each contribution into a coherent installation, the work became more actively collaborative and more focused on water. 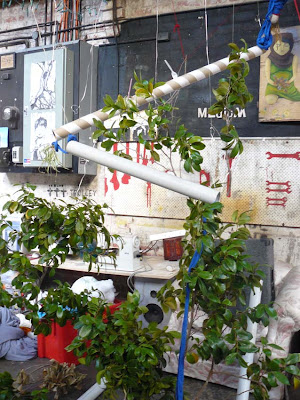 The last thing I made was my best and most ambitious: a hanging screen of shrubs laced with tubes connected by a long flow of blue fabric.
Posted by Meliors Simms at 8:42 am 1 comment:

Email ThisBlogThis!Share to TwitterShare to FacebookShare to Pinterest
Labels: Look what I made, Melbourne

Bibliophilia is 4 years old today! This is the 586th post I have published here. These days the posts aren't always so frequent, but at least they are much better illustrated than they were back in 2005.

For the past year or so Bibliophilia has averaged 170-180 hits per week which doesn't break any internet records, but is enough for me to keep going, knowing that there's folks out there who are interested in what I have to say. All the loyal readers, especially those who post comments or otherwise let me know they are following, make the effort worthwhile. Without you all, I may as well be still be doodling in my diary.

In the past four years I have blogged from homes in five regions in two countries (including seven housesits, six wwoofing gigs and a few rented rooms). Tomorrow I fly home from Australia to New Zealand. I'm not sure how long I'll be there or what I'll be doing once the first few weeks of plans run their course. I do know my internet access is going to be much less reliable over the next month at least, so there might not be so many posts. But I will eventually sort that out, I promise and be back to my normal, variable level of broadcasts.

Meanwhile, if you miss me, you can check out the other blogs I contribute to: Nourish Us, a family recipe blog, in which my quirky extended family reveals the secrets of our sweet rolls and chicken casseroles; and Response, a brand new blog to accompany a new collaborative book project (for which potential contributors are invited to contact me if interested).
Posted by Meliors Simms at 8:17 am 2 comments:

Email ThisBlogThis!Share to TwitterShare to FacebookShare to Pinterest
Labels: memoirs 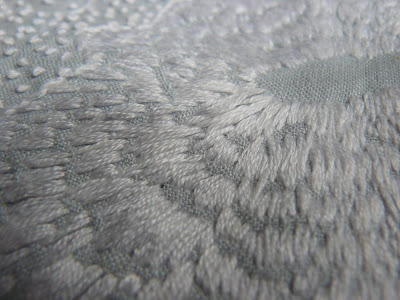 I went into the Daintree to be inspired. I thought I would be inspired to write poetry about the rainforest and come out ready to use paper and ink to make book art telling forest stories. But the thing about inspiration is that it always doesn't comply with expectations.

Although I did write some poems, living in an environment so unfriendly to paper and books forced me to try other media. You've seen the crocheted coral. But I never told you about the embroidery which I started not long after my first disappointing effort at book making in the rainforest. 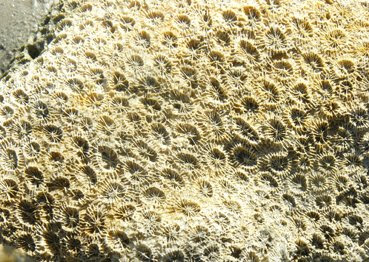 I had been given a nice linen dress with a stain on it that I decided to cover up by stitching an image of one of many pieces of bleached and broken coral to be found on the beach. Both process and outcome proved to be so pleasing to me that I decided to carry on embroidering bleached coral designs in a band around the whole hem of the dress. 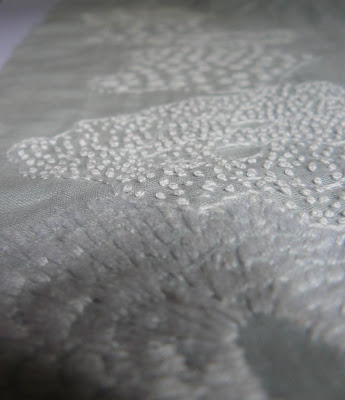 It took me about four months to finish it, not counting the months I put the embroidery aside to crochet coral instead. I'm not sure why I never blogged about it while I was doing it. Partly because I never managed to get any good photos until this week. Partly because I was/am embarrassed about the dress with its stains, my amateur embroidery (I was just making up the stitches as I copied the patterns from dead coral) and the incredible amount of time it took to finish. Also it's not a book. There is no ink, no text, no paper. 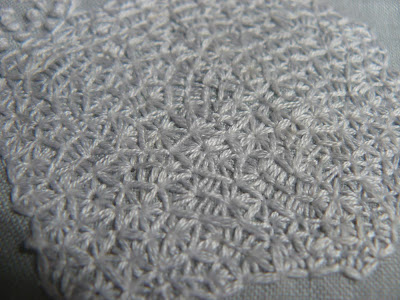 As well as being embarrassed, I am also quietly pleased with it. Pleased with my increasingly adept stitching, pleased with the combination of subtle colours and rich textures, pleased with discovering a new medium to be passionate about. And passionate I am. Try as I might to get excited about being able to print again, about expressing my rainforest experience in book form, actually all my good ideas lately are for thread and yarn, not paper and ink. 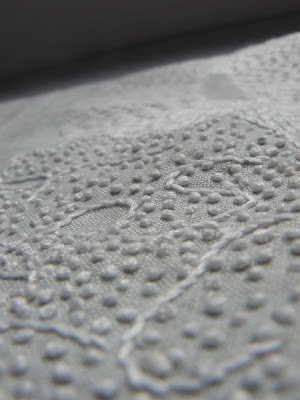 Posted by Meliors Simms at 12:41 pm No comments: