I never understood the words to MacArthur Park, they seemed so silly as to be unbelievable, surely I was mishearing:

Someone left the cake out in the rain
I don't think that I can take it
'Cause it took so long to bake it
And I'll never have that recipe again
Oh, no!

Why would someone leave a cake in the rain? What happened to the recipe? Why such wrenching emotion about a wet cake? But together with high school friends I sang along anyway as I danced to the Donna Summer disco version and it has a little hook in my heart whenever I hear the soaring violins or the part where it suddenly speeds up from a slow soppy ballad to a dance beat.

Yesterday I was delighted on my way to work, and even more delighted on my way home, to see someone has staged MacArthur Park in Mander Park, Whangarei. Mander Park is one of the two parks I walk through between home and work. It is a big open square of grass bounded by two very busy roads and two very quiet ones, with a playground, some big old deciduous trees, one diagonal path through it and lots of daffodils right now.

And yesterday someone left a cake in the rain there. I always imagined Donna's cake as being a fragile yellow sponge (there's a yellow dress in the song too) melting in a drizzle, but the Mander Park cake was a big old fruitcake, the kind with about an inch of marzipan icing set like rock. The rain was pounding down on it for much of the day and it still looked as solid and impervious at 5pm as it had at 8am. I tell you, you could roof a house with that icing and stay dry inside. The fruitcake itself was holding up pretty well despite valiant efforts from flocks of sparrows and pigeons.

I imagine it as an wedding leftover that has been hanging around someone's cupboard for months or maybe years, solidifying to a stone-like consistency until they couldn't stand it anymore and took an axe to it, hacking it into chunks and then carrying the heavy, heavy sack of dismantled cake to the park before dawn and heaving each big piece onto the grass hoping the rain and the birds would just make it all go away. But that cake, man, that cake, it is shining on the grass like blocks of white marble. That cake isn't going anywhere fast.
Posted by Meliors Simms at 6:38 am No comments:

I am making a piece called Charnal Grounds, a sort of mixed media thing which is almost finished except for the printed text. For the text, I have collected four short poems/fragments of poems written at different times when I felt like I was facing the worst life could throw at me. I'm pleased to report that even at these times of feeling like death would be a blessed relief I could write about it with a sense of humour.

Anyway, on Sunday, I was composing the type with Jim Morrison, an amazingly generous, talented and fun teacher of printing. We got three of the little poems in the chase in 10pt Roman italic (I don't want such bitter, dark words to be too easy to read!) and then realised there were only two 'e's left in the e-compartment. I searched the rest of the case and found two more, but four 'e's were not going to be enough to make up the fourth poem of the set.

It was nearing the end of a long afternoon so Jim and I, (along with Peter Strong, another helpful printer who has offered to help me out) locked and proofed what we had. We talked about printing the page in two separate runs in order to recycle the 'e's we do have but in the end I decided I would rather write a new poem, with only four 'e's and print the whole page at once.

Revisiting the feelings of Charnal Grounds when my life is in pretty good shape means there is some dissonance between my emotions and my experiences. It's a useful lesson in the immateriality of feelings. And out of feeling a bit yucky for no real reason other than paying attention to old hurts I was able to summon a new Charnal Ground poem using only four 'e's.

Cast out
on the hot high plains of humiliation
my skin shrinks and pricks
hairs twist viciously in my follicles
my eyes parch and throb
as tears fill my mouth:
if I try and talk, I'll cry.
Posted by Meliors Simms at 6:31 am 1 comment:

Under a smiling new moon

Earlier today I caught up with a friend who I hadn't talked to since he and his teenage daughter helped chalk Love Letters at Your Feet during the Mid Winter Arts Festival. He told me that his daughter, when asked what she enjoyed most about chalking poems in Cafler Park, replied: "Seeing Meliors get so excited about it."*

And that reminded me how much I did enjoy it, the memory having been dimmed slightly by the intervening rainy weeks and my new focus on preparing for the Domestic Pilgrimage exhibition in November. Emboldened by no rain all day(!) this evening I spontaneously decided I'd go out with my chalk and write up some fragments of the poems I've been working on for Domestic Pilgrimage. It was pretty dark and I seem to have lost my intuitive judgment of word spacing at speed, but I had fun. If it doesn't rain before dawn there should be a somewhat legible surprise for farmer's market shoppers and library users on Saturday morning.

I wrote a couple of fragments from Do the Dishes which I am making into an artist's book at the moment and a couple of very fresh poemlets:

How gentle we must be
How resilient we are

Come back to yourself
you are beautiful
when you are here

*Which made me think about how rare it must be for young people to see adults show uninhibited passion for their work.
Posted by Meliors Simms at 10:43 pm No comments:

Chandler and Price for sale

I received a call a couple of weeks ago from a lady at T & D Print here in Whangarei. They are upgrading to digital printing and are looking for someone to buy their old platen jobber press. It's a Chandler and Price (a much better known brand than TKPT's Arab) with the number 837 on it. It looks very much like this C&P press on Briar Press and the one on this site.

I'm not in the market to acquire a printing press (they just aren't portable enough for my transient lifestyle), and if I was I would want something with a big platen so I could print posters and wallpaper, big stuff that the Arab can't handle. In fact, the C&P is very like the Arab, they could be brothers, at least to my inexperienced eye.

But I couldn't resist the opportunity to visit a venerable old press so I went round for a bit of tire kicking. In a tiny print shop chock full of machinery, the C&P is tucked into a little alcove with just enough room for a skinny operator to get in behind the feeder board. They have disconnected the rollers and and the treadle as it has been used solely for motorised die cutting and creasing. But all the bits are still there and it would be pretty simple to convert it back to a foot operated printing press. 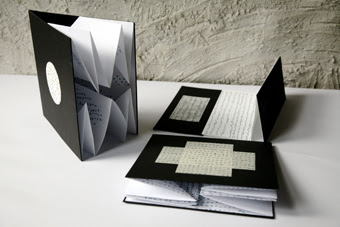 This week I am sending books away to two different book arts exhibitions: one in Noosa, Queensland and the other starting in Auckland and touring to Dunedin. Amongst the books for exhibition are these three (above) of the Big Storm series. Big Storm, Broken Window and the one I haven't posted on here before: The Mandala of Non-Attachment. 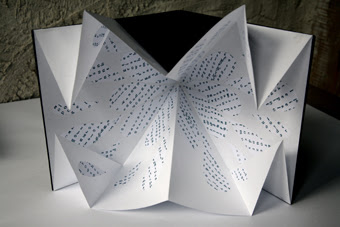 This is the Mandala of Non-Attachment (above). I cut out water drop shapes from the Love Falls prints and collaged them into a mandala on a Turkish Map Fold. The image first came to me as a kind of exploding chrysanthemum and then developed into a much more watery theme in keeping with my rain-drenched challenges of the past couple of months. Part of me wonders if working with this image hasn't invited rain more intimately into my life than I might otherwise have encountered.

Else, a friend at Te Kowhai Print Trust, has also been working with mandalas over this period, and as she said to me one day, the spiritual power of the mandala is experienced more in the making than in the viewing. But nonetheless, it's a pleasing book, in an edition of three, one available for sale at the moment, POA.

Beautiful photographs thanks to Marguerite Kent.
Posted by Meliors Simms at 6:35 pm No comments:

Email ThisBlogThis!Share to TwitterShare to FacebookShare to Pinterest
Labels: books, Letterpress, Look what I made, storm book

Magnolia of the Year Nominations Open

Yes dear readers, magnolia season is upon us, at least in the northern North Island of New Zealand. And that means it's time for the second annual Bibliophilia Magnolia of the Year Awards. The criteria for the winning tree remains arbitrary and opaque, though hints about the judge's personal taste (mine) may be discovered in past magnolia-themed posts here and here and here.

This is the first year that I am organised enough to accept nominations for Magnolia of the Year from Bibliophilia readers. You may email me SMALL photographs* of your favourite magnolia tree. The tree must be in a public place or visible from a public place. The photo must be taken this year. Nominations will stay open until my sources in Dunedin tell me that South Island magnolias have run their course, which gives you at least month or two of magnolia appreciation!

Please include location information so that the tree's remarkableness can be confirmed by independent sources.The winning tree will featured on this blog, and the person who nominates it will receive a handmade limited edition artist's book, so make sure you include your contact details so I can send you the prize if your tree wins.

* Photographs of a very small size please-I am on dialup and large photos will be automatically disqualified for being annoying to download. And to inspire you, here is a terrible photo of a kitsch painting of a nice sprig of magnolia blossoms, found over the toilet in friend's house.

Email ThisBlogThis!Share to TwitterShare to FacebookShare to Pinterest
Labels: flora

Here are some of my favourite photographs that Paula Campion took of Love Letters at Your Feet. I might post some more later as there are so many beautiful pictures to choose from. 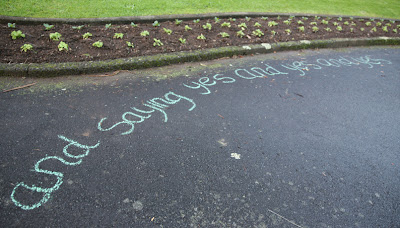 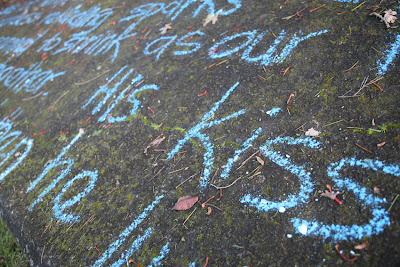 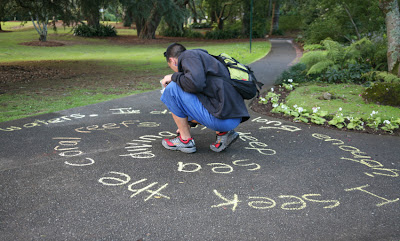 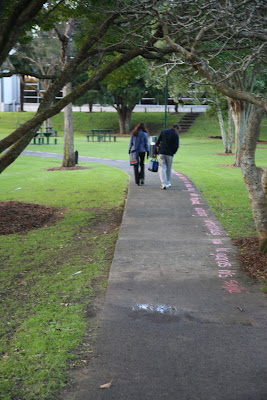 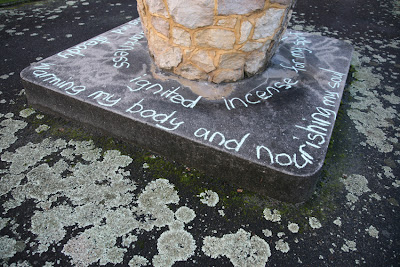 * * *
Wish me luck. I'm driving into Auckland for the weekend, and driving in Auckland is generally so traumatic (at least for me) that I have largely avoided doing so for nearly two years. If there are never any more posts on this blog you can assume that I am still hyperventilating in circles around Te Atatu or somewhere like that.
Posted by Meliors Simms at 10:25 am 3 comments:

Email ThisBlogThis!Share to TwitterShare to FacebookShare to Pinterest
Labels: chalk, Look what I made, Whangarei 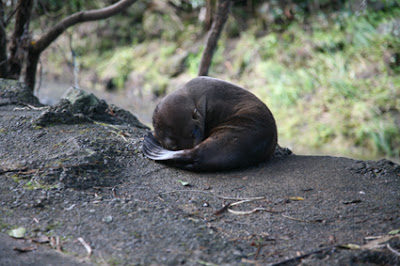 Here is the famous fur seal pup who graced Cafler Park during the Mid Winter Arts Festival, attracting many more people to walk the paths of Love Letters at Your Feet than would have otherwise.

The Department of Conservation eventually uplifted the pup to a more seal-friendly environment.

Photograph by Marguerite Kent.
Posted by Meliors Simms at 8:28 pm No comments: