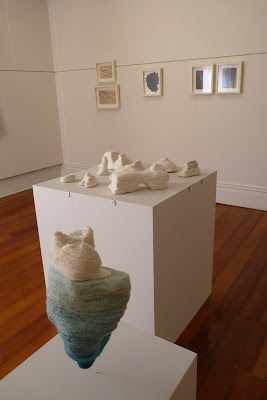 I learned years ago that when someone asks whether an exhibition is 'successful', or 'went well' they generally mean 'did you make lots of sales?' Unfortunately , only a small proportion of artists have sell out exhibitions and as an 'emerging' artist it would be easy to get discouraged if that was the only or even best way to measure success.

Over my years of exhibiting I've learned to understand success along a number of axis including meeting my own exacting standards of quality, receiving attention and positive feedback, expanding networks and enjoying new opportunities, as well as making sales. By savouring and celebrating success in all of these areas I can be pleased with any achievements without being too disappointed by the things I can't control.

If I am able to look around just before people arrive for the opening and feel relaxed pride and enjoyment at seeing my own work, then I consider the exhibition is a success, no matter what else comes to pass. If I want to revisit the show during its season, and am able to look at every work without focusing on imperfections, then I have succeeded in satisfying my harshest critic.

I assess my success at receiving attention by asking whether my effort to get publicity were rewarded. Has the exhibition received attention from people beyond my own circle of friends and supporters? Is it reviewed? Am I mentioned in articles, interviewed, featured on blogs or otherwise given publicity that I didn't specifically seek by myself.

Positive feedback is collected in conversation at the opening, or later; comments on my blog or facebook posts, in emails from friends, acquaintances and strangers- I always make sure my contact details are easily available to take away from the exhibition.

I measure my expanded networks by counting the new names added to my mailing list, the new 'likers' on my facebook page, hits on and followers of the blog. Extending and reinforcing connections with collectors, curators, gallery owners and managers, art advisers and members of art organisations with influence carry extra weight in measuring success along this axis,

New opportunities that arise from an exhibit can include invitations to exhibit or submit proposals. My own pursuit of new opportunities is enhanced by being able to attach to my proposals the interviews or reviews associated with the exhibition.

Sales feels like the most difficult to succeed at, the thing I have the least control over and that I understand the least. At a minimum I hope to sell at least one work. If I can make enough to cover the gallery fee, I am relieved. If I make enough to cover all or most of the upfront expenses of putting on an exhibition, I feel richly rewarded. I look forward to a sell out show, to making a profit and to one day being able to support myself from making art.

Imagining Antarctica has been a success in all these criteria. My expectations were exceeded in every way. Examples include:
Overall I've experienced a boost, not only to my bank account, but to my confidence and my reputation. It feels like Imagining Antarctica has helped lay a strong foundation for pursuing my next goals with courage and persistence. If I'd only been counting sales, I wouldn't be feeling so well resourced for the future right now. 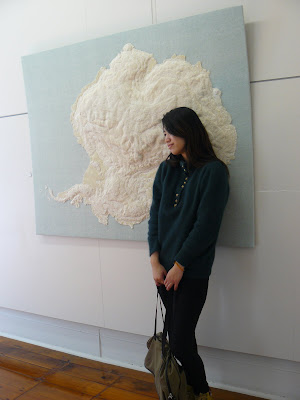 A visitor to the gallery poses in front of My Antarctica taking advantage of the permission to photograph.
She's much more likely to tell her friends about the show now that she has a photo of herself to share.
Posted by Meliors Simms at 10:37 am 1 comment: 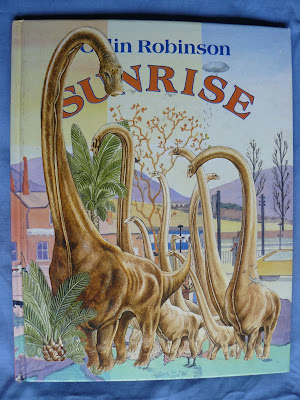 Its been a great joy to return to my collaborative altered book project with Bethwyn, Frugal with the Bruegel. We had a long winter break while I was caught up in preparing for exhibitions and she had a term and a half of teaching full time. 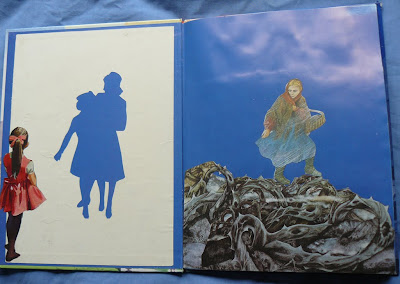 However, early in the year we had decided to enter some books in the Association of Book Crafts biannual exhibition opening in Auckland later this month, so that was extra incentive to overcome any inertia that might have delayed out altered book project further. We entered two books were more or less finished last year and two books that we finished this week. Here is one of the recently finished books, Sunrise, in its entirety. 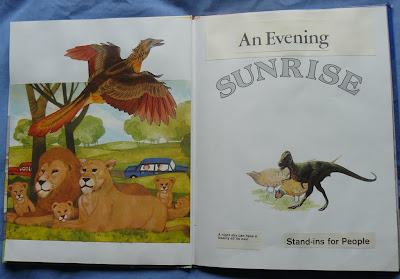 I happen to be reading a lovely book by Diane Ackerman called Dawn Light: Dancing with cranes and other ways to start the day, which is a series of meditations on dawn through different seasons and in different environments. She is a favourite author of mine for peaceful, grounding yet uplifting prose. I also feel like this spring heralds the dawn of a new stage in my creative practice, as I prepare to lift my game up another few notches. So Sunrise is a very apt book to be sharing with you. 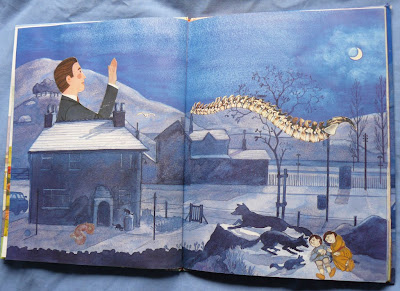 The base book 'Sunrise' was a perfectly lovely wordless meditation on a single dawn from a single perspective on a small rural village, in which a few quirky characters appeared. Bethwyn and I added an abundance, perhaps almost an excess of quirky characters and other additions to this, working on it in slow, occasional bursts for at least a year. 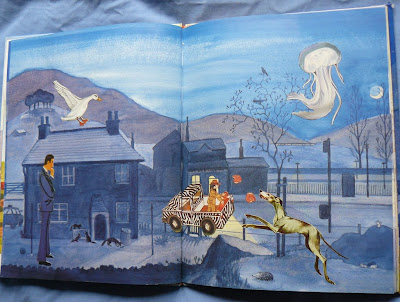 If I arrived at a Frugal with Bruegel session feeling anxious or sad, a couple of hours of gentle silliness with Sunrise would make me feel good again. 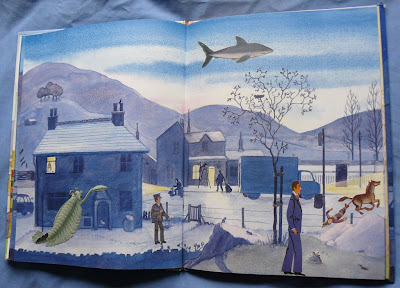 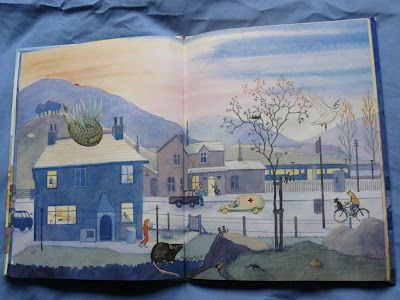 Sunrise is also known between Bethwyn and me as the Uncle George book because of our extensive use of a couple of 70s kids books in which Uncle George takes his niece and nephew to the zoo and tv studio. You can play spot Uncle George if you want! 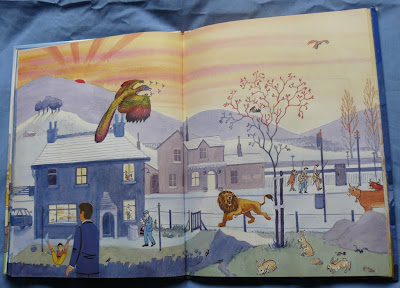 Some of the best contributing books to Sunrise were old primary school textbooks and story compendiums with images by many different illustrators. 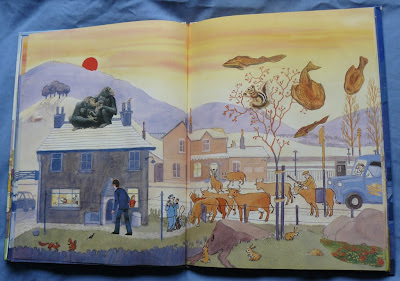 Dinosaurs and other prehistoric life from evolution (and creationist) books were the final touches to tie everything together in the last session. 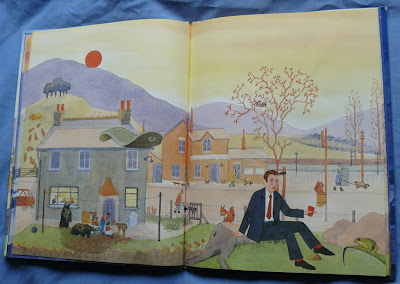 Unlike the art I make with textiles which is very conceptual, deeply researched, deliberately planned and exactingly executed, Frugal with the Bruegel is spontaneous, playful, casual, whimsical, intuitive and often ridiculous. Which is not to say we don't have rules, but only for us to feel no pressure and have lots of fun. 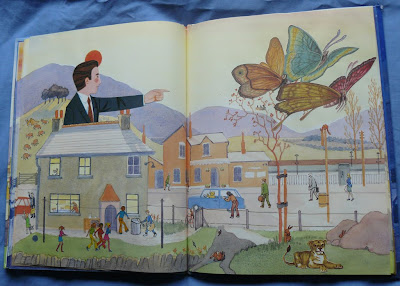 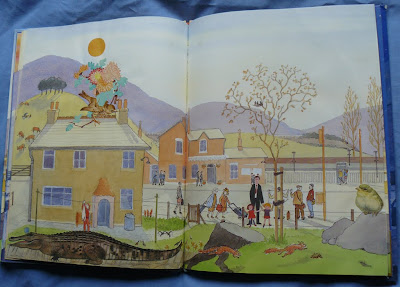 The point of making Sunrise was to lighten my heart in the making. If it has a message its only perhaps to slow down and look carefully, because there's a lot to see in every spread. Not only the weird incongruencies I pasted in, but the original illustration beneath is full of interest too. Viewing these photos on a computer screen its probably not easy to always tell what I've added and what was there first. At this distance I'm not completely sure myself anymore. 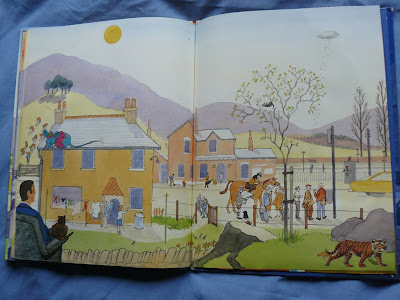 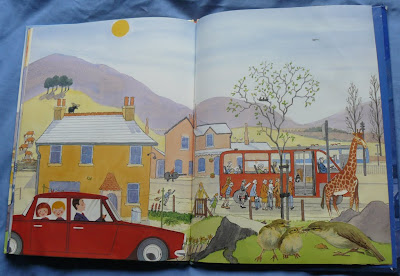 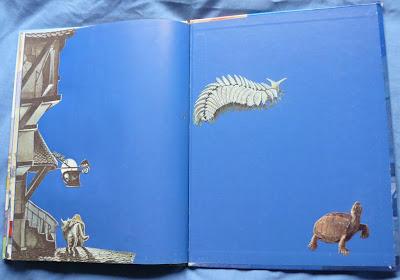 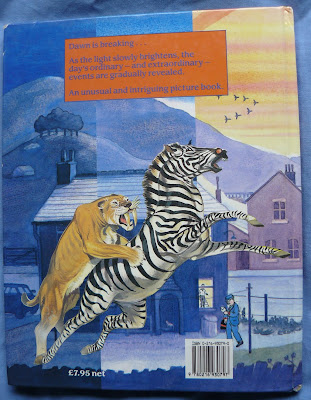 You can see the real thing, along with our other altered book submissions to the ABC book exhibition at Lake House Arts Centre, 37 Fred Thomas Drive Takapuna, Auckland between 31 October and 20 November.
Posted by Meliors Simms at 5:56 pm No comments: 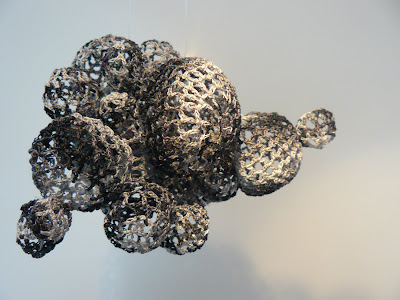 Here is my first finished little cloud. It's as big as two small balls of crochet cotton will yield, about 17x12cm. It casts lovely lacy shadows and spins in the breeze. I'm very pleased and want to make more.

I've started another cloud which I intend to be bigger, and more dispersed than this small ash cloud. I crocheted the first sphere while listening to a fascinating talk by Andy Lowe at the Waikato Museum about his experiences of installing Michael Parekowhai's incredible bronze sculptures at the Venice Bienale .

Micheal's huge bronzes weigh tonnes, literally. There was a piquant contrast between hearing about his heavy bulls and grand pianos being hoisted out of the Grand Canal and into the Palazzo Loredan dell'Ambasciatore versus the airy, almost weightless little cloud bubble taking shape in my hands as I listened. Of course packing, transporting and installing such crushable delicate pieces will bring their own technical challenges where ever they end up being shown, but I doubt block and tackle will be needed. 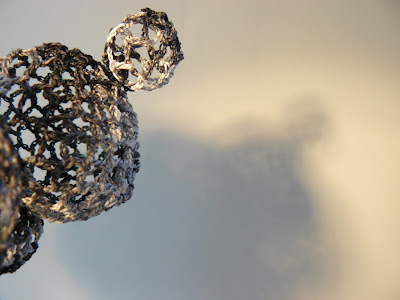 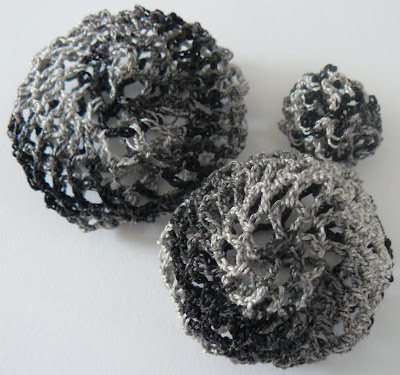 Imagining Antarctica is up in ArtsPost for one more week, so if you haven't seen it yet there's still time. Since installing it three weeks ago I have been having a rest from blankets, and besides catching up on paperwork and housework what have I been up to?

I had the flu for a week and didn't do anything. But before I got sick I finished restoring, at long last, my Adana printing press. Yesterday I inked up for the first time and printed 75 new business cards for myself. It was fun to remember how easy printing can be, especially on a little, user-friendly press like the Adana. 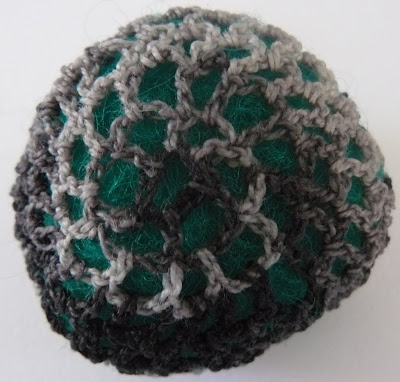 As a reaction against my single-minded focus on blanket stitching land- and ice-scapes with heavy wool blankets for most of the past two years, I have been crocheting light as air little mesh spheres. I've had an urge to make clouds for ages: the aurora borealis of Antarctic winters, the radiation leaking out of Fukiyama, the volcanic ash clouds that have grounded planes around the world recently.

In my first experiment I used up a small hank of thick creamy wool which gave three small gorgeous cloud like globules. New wool is beyond my means at the moment (the exhibitions have left me with some debt) so I've been checking out the haberdashery bins in op shops hoping to find a big stash of a suitable yarn for one of my cloud making ideas. The first thing to show up was a couple of new balls of fine crochet cotton in variegated greys.

Crocheting cotton hadn't been my intention (too fine, too slow) but the grey shouted the volcanic ash of Iceland and Chile. I've been making mesh balls, sort of 360degree doilies in various sizes. To make them spherical I'm experimenting with various home made starch recipes and methodologies. When the crochet is soaked with starch I stuff it with green wool roving to hold its shape while it dries

The next step will be to stitch all my little spheres together to make a small cloud of particulate matter suspended in midair. 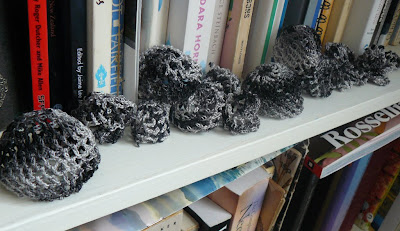