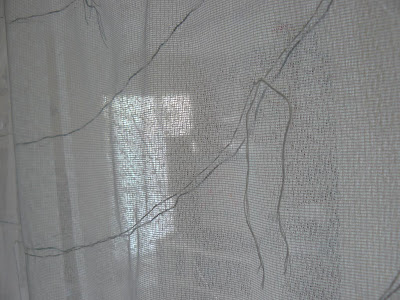 Detail of Blizzard, a work in progress
Today I finished the stitching part of my Blizzard. There's still work to be done to mount it, but that will come later, after I've finished the urgent island I'm making to a deadline. The decorative/visible stitching of Blizzard had to be sewed standing up. Each long filmy piece of net curtain took its turn pinned to the cord that usually holds a noren to screen my sleeping alcove from the rest of the studio.

In order to see what I was doing on the translucent material, I had to work in daytime, with the panel between me and the window, so my thread was silhouetted against the light. Covering each panel with the Blizzard design involved a lot of stretching and bending while I sewed. It was tiring work, which I alternated with the demanding task of needle felting the layers of my island.

Now that the Blizzard is packed away for the moment, I've picked up another task to alternate with needle felting. I'm embroidering the ocean background for my island. I want a very deep blue sea so I'm using my bluest blanket overlaid with a solid ground of dark teal blanket stitch. The colour needs to be very rich and vibrant to hold its own with the intensity of the island colours and it's the largest piece of blanket I've worked on since I finished My Antarctica.

The timing of my switch from Blizzard to ocean stitching is perfect. Today is really the first day its been cool enough to make covering my lap with a heavy wool blanket appealing. The island is part of my Extraction series, with no relationship to the Antarctica theme, yet covering my lap with blanket takes me back to the pleasures of last winter's stitching marathon.

The island and its ocean, although based on a dream with no strong climatic or geographical links to reality, nonetheless reminds me of an island I noticed a couple of hours into my last flight home from Brisbane. Somewhere in the middle of the Tasman Sea, a dot of a gorgeous green atoll sits in a vast blue deepness. It looks absolutely nothing like the island I am making, but I don't have many islands in my memory that are as small and as isolated as this one, so that's the connection.

That island was one of the two most beautiful and unexpected scenes I've ever viewed from an airplane. The other was several hours of Northern Lights, aurora borealis, as I crossed Canada from East to West on an almost empty plane for an almost endless night. One day I might have to stitch those curtains of light too. 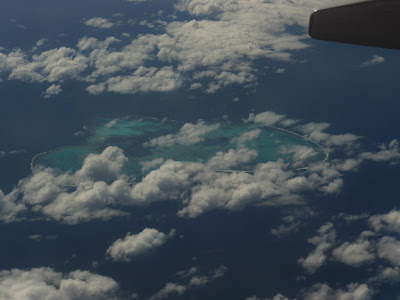 A tiny island somewhere between Australia and New Zealand.
Posted by Meliors Simms at 8:19 pm 1 comment: 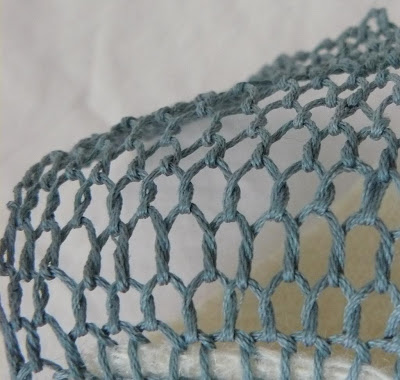 In between the very substantial pieces I'm working on, I've done a little experiment in the other direction.

This is what blanket stitch looks like without the blanket (or any other backing). It goes a long way to satisfying my desire to make lace.

I like the watery, airy, foamy, cloudy quality of this technique. I also like the stiff, sculptural texture that suggests many possibilities for stitching in three dimensions.

There is a delightful contrast between this kind of blanket stitch and the very dense, deep and soft island in which I use the same stitch to completely different effect. 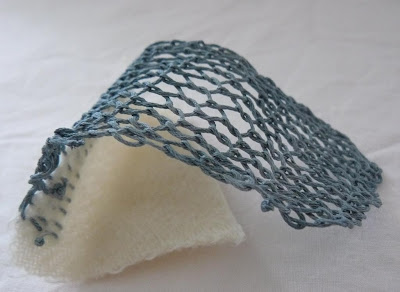 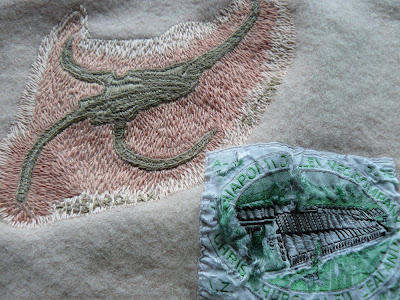 My embroidered tessarolax fossil (framed) is now part of a wonderful art for Christchurch fundraising project called Many as One, organised by Claire Benyon- another artist with a passion for Antarctica.

The idea is that anyone can donate any amount and go into a weekly draw to win one of several works of art donated by diverse artists. My favourite is the wonderful engraved perspex by Lisa Roberts, another Antarctic themed piece. But there is an amazing variety of art most of which has nothing to do with Antarctica. I encourage you to go check out the site, click to make a paypal donation in any currency, and be in with a chance to win any of the exciting art works on offer. 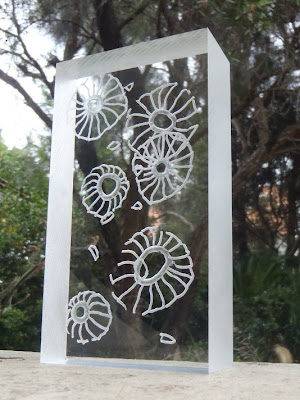 I highly recommend Lisa Robert's website, not least for her fantastic Antarctica animations.

(This post brought to you by free WiFi in Garden Place, as the modem at home has died, and I don't know how soon it will be replaced)
Posted by Meliors Simms at 5:48 pm No comments:

Email ThisBlogThis!Share to TwitterShare to FacebookShare to Pinterest
Labels: Antarctica, fossils, giveaway, Look what I made 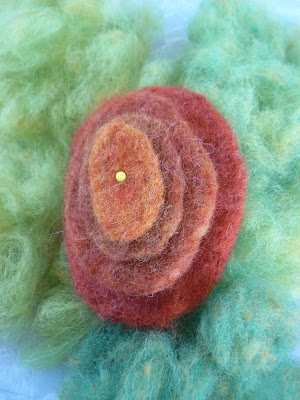 Felted test of reds before stitching, sitting on blended greens before felting
I'm very comfortable working with an Antarctic colour scheme. White on cream, a bit of black with my white, shades of blue to show up the white, some more white, lots and lots of white... these are colours I can handle. It's not that I don't like other colours, as a glance at my wardrobe proves, but manipulating colour as an artist seems a lot more challenging than choosing what to wear everyday (and that can be hard enough!).

The rich earthy tones of my latest project are intimidating. I am creating an image from my poem, Miner's Cook so I knew from the beginning I wanted grass green and iron ore red. But what shades, and how to create and combine them with wool roving and embroidery floss? 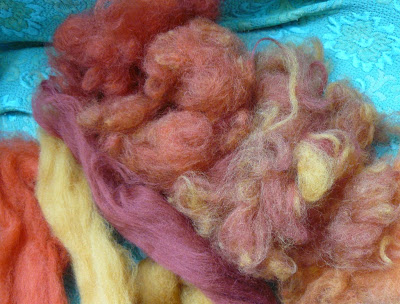 Three base colours of left, blending in progress on right.
With three earthy and three grassy colours of wool roving I blended them by hand to achieve a variety of shades. The colours of the wool are then modified and textured by the not-quite matching colours of embroidery floss. This is all worked out by trial and error. My visual diary holds samples of each colour I mix with notes on the base colours that make it up. 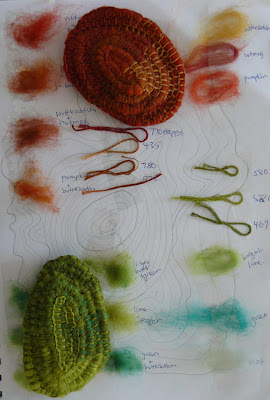 Then I stitch a test piece that combines the wool shades with threads. The test pieces help me help decide which thread colours to use on which felted shades. Its a slow, thoughtful, demanding process saturated with uncertainty and doubts. After a long week of exploring colour I am finally hopeful I can start working on the actual island, which itself presents another set of new challenges on top of the ongoing demands of applying the colours, not least of which is a near deadline (something I usually try to avoid!).
Posted by Meliors Simms at 9:37 am 1 comment: