'Great God! This is an awful place'* 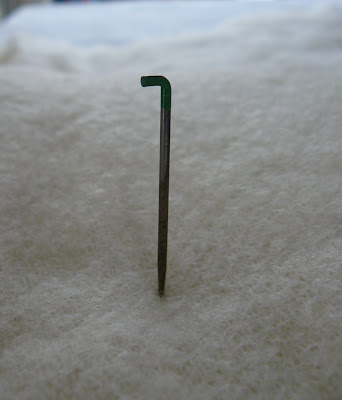 Felting needle
Even though it happened 98 years ago; even though I've known the ending of this story most of my life; even though I have read,watched and heard dozens retellings in the past decade of pursuing my passion for Antarctica; I still find myself sleepless with anxiety for Scott's Polar Party. 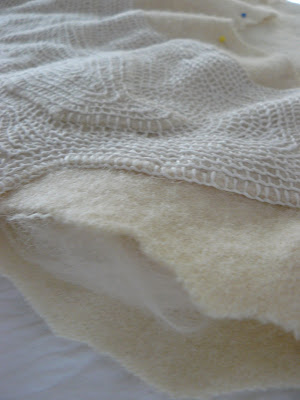 A thin layer of undyed wool roving between the blanket contours

The past few days I have been immersed: in the mornings stitching the great empty waste of East Antarctica onto the contour that meets the tops of the Queen Maude mountains; in quiet times at work in the afternoons leafing through reproductions of Amundsen's lantern slides; in the evenings reading Apsley Cherry-Garrard's literate, harrowing, defensive and deeply sorrowful account of the Worst Journey in the World. Cherry is the most quoted of Antarctic explorers, for good reason, but this is the first time I've read his book in the original. 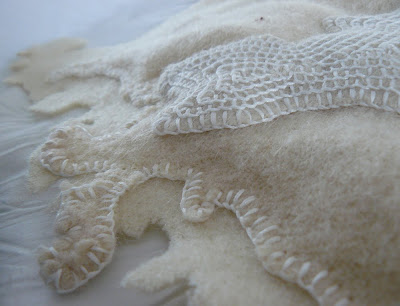 The tops of the Beardmore Glacier (Scott's route) and the Axel Heiberg Glacier (Amundsen's route)
There is something immensely moving to be stitching over the miles covered by the final five who went to the Pole with Scott and never returned, at the same time as I am reading about the support parties who were battling their own awful journeys and ultimately waiting with fading hopes for Scott's return; with my minds eye illustrated by Amundsen's snapshots of his own 'dream run' to and from the Pole a month earlier than Scott. 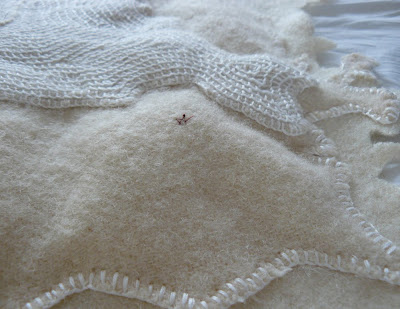 I am so cross with Scott (no doubt influenced by recently reading Huntford's attack on him) as it seems unforgivable to have made so many poor (sentimental, impetuous, arrogant and ignorant) choices that led to the death of such fine men. I identify much more strongly with Amundsen, being more attracted to pragmatism than romance. Amundsen's triumph (always seen in the shadow of Scott's tragedy) was the result of careful considered planning and decisions at every stage. 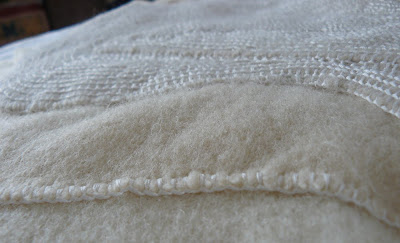 Some of my current Antarctic anxiety may be related to the challenges of adding a new contour. My technique, although trialed on with reasonable success on Ross Island, is by no means a reliable approach for this much larger work. I am constantly questioning my methodology and trying to improve the results. It's not as hard as man hauling through blizzards with scurvy, but it's still a challenge. I want desperately to live up to Amundsen example, but I fear I share many of Scott's weaknesses.

* Robert Falcon Scott, on reaching the South Pole, second
Posted by Meliors Simms at 10:28 am 1 comment:

Home, and Away with Antarctica

My new home/studio is really just a single bright, light, room (plus bathroom) that I've divided with a couple of large pieces of furniture. I was given a set of open shelves that are keeping the kitchenette separate and not too cluttered; and I've used the giant book (You are Beautiful) I made for the Domestic Pilgrimage exhibition, to screen off a sleeping and storage area. Surprisingly, dividing it up into three small 'rooms' makes the whole space seem bigger than when it was just an open-plan box. 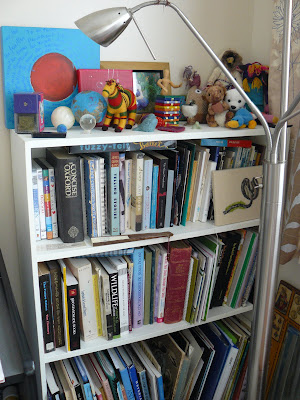 My stitching chair shares a cosy corner with a bookshelf and some sentimental treasures..

I've unpacked everything that needs to be unpacked, and while there's still some judicious sorting and arranging to be done (along with picture-hanging and acquiring some drawers for my clothes), it feels homey enough for me to turn my attention elsewhere again. Finally getting the phone and broadband connected have made all the difference! 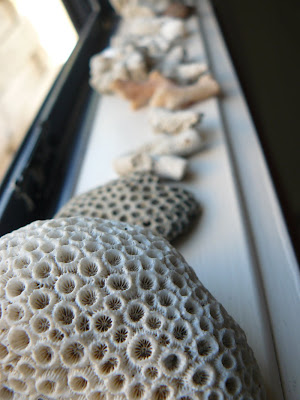 For the first time all my bits of bleached coral are together, on the bathroom windowsill
I'm back at work on my stitching. I have a comfy chair just the right height and depth for working on my tapestry frame. The lighting is just right, my solar radio sits nearby on a sunny window sill so I can listen to my beloved Radio New Zealand National (while I still can), or I can watch movies on my laptop (I have neither room nor inclination for a tv). 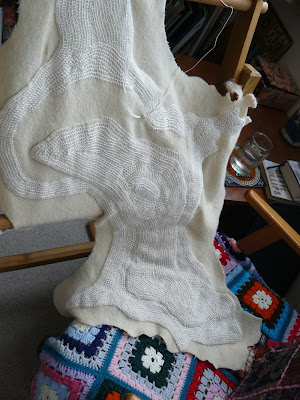 At work on Antarcica, on my granny-square-covered chair
In the past few days I've made good milage in Antarctica. I've almost finished the 3000m contour, which was virtually halted for more than a month by a blizzard of distractions and demands from the outside world. Finishing this contour is an exciting landmark for me. So far I've been embroidering my way concentrically outwards from the centre of the ice dome's smooth curve. My hours of repetitive blanket-stitch are about to be interrupted by an off-the-tapestry-frame flurry of measuring, pinning, needle felting, before I take up my steady slog through the snow again. The next countour will bring the first taste of the jagged peaks that form the rim of the continent's ice filled bowl. 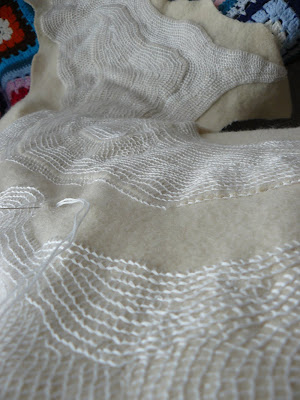 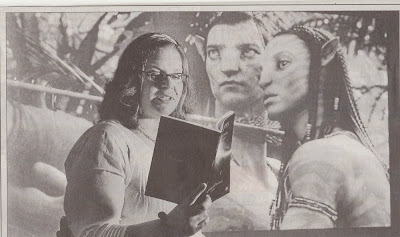 Reading poems to the big blue folk
Waikato Times 13 February 2010
Don't be misled by the headline. 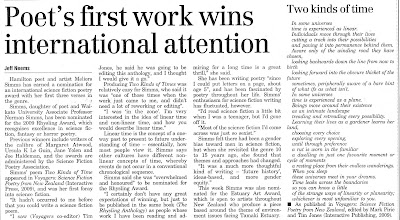 Click on the article and it should zoom in big enough to read.
I'm packing today, moving house tomorrow... will post properly when I settle in.
Posted by Meliors Simms at 5:11 pm 6 comments:

Email ThisBlogThis!Share to TwitterShare to FacebookShare to Pinterest
Labels: Hamilton

Two lots of good news to report; but briefly, due to the consequences of my bad news. Please do follow the links to find out more details than I have been able to include.

Breathe, my mangrove piece, has been selected as a finalist in the Uxbridge Estuary Art Awards 2010. I made the French knitted pneumataphores especially for the Awards, which encouraged research into the environmental issues facing the Tamaki Estuary. I was excited to have an opportunity to finally realise some of my ideas for representing mangroves in my art.

The Estuary Art Awards exhibition open on Thursday 11 February at Uxbridge gallery in Howick. I encourage Auckland readers to go along and see all the finalists. The exhibtion runs until 10 March. 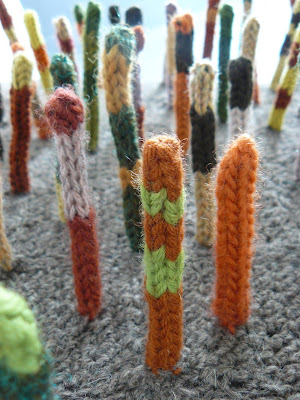 The other bit of good news is that one of my poems, Two Kinds of Time, has been nominated for the 2010 Rhysling Awards. This poem just seems to run and run! Written for, and first published in the Voyagers Anthology, it also inspired me to make a (very) short film and a limited edition artist's book (which has sold out).

Tim Jones, one of the editors of the Voyagers Anthology took the initiative to write a media release about the nomination, which you can read on his blog, as well as on Scoop and Beattie's Book Blog. I'm very grateful for Tim doing this, since I am still devoting all my energy to my temporarily fulltime 'straight' job. 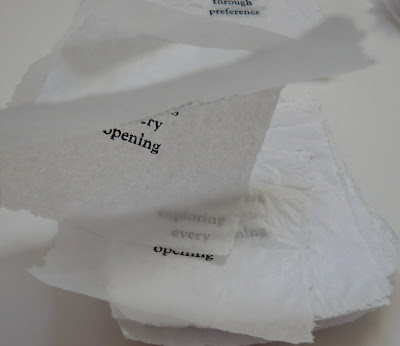 Bad news: yesterday on my way to work I was knocked off my bicycle by a driver opening his door suddenly. Fortunately I was riding very slowly so no great damage has been done. I am shocked, shaken and a bit bruised; my knuckles took the brunt of the collision of handlebars with door. I'm taking the accident as a sign of having reached my limit for full-time work, so intend to negotiate down to part-time hours by the middle of next week. Next weekend I'm moving, and then once ensconced my new studio-home, I look forward to blogging progress on my own, actual, creative practice again.
Posted by Meliors Simms at 1:25 pm 8 comments: