I'm learning to make digital stories from my poems. I have just finished my first attempt and proudly posted it on You Tube. Have a look! Its only 44 seconds long.

I made Non-Linear Time using Windows Movie Maker, the software that came bundled with my laptop. It's very easy to use, but with limited flexibility, which is why I've gone for a very simple little film. Anything fancier could only have been cheesy.

The images are of some letterpress printing I did back in the early days at Te Kowhai Print Trust in 2007. I was going to make an artist's book of my poem, Two Kinds of Time, but my ambitious experimental approach outstripped my letterpress skills at the time and after printing these pages I got frustrated and went onto other, easier projects. But I've hung onto the printed pieces of tissue, thinking that one day I would go back to making Two Kinds of Time.

Two Kinds of Time actually does have a book existence. I was inspired to write the poem a few years ago when Tim Jones first mentioned that he was going to be editing an anthology called Voyagers: Science Fiction Poetry from New Zealand. After a long wait Voyagers, edited by Mark Pirie and Tim Jones, is finally out on Amazon right now and will be available in NZ early June. But for some reason Two Kinds of Time is one of those poems that has kept nagging at me for concretization*.

So, last week, inspired by the digital storytelling course I am taking through Artmakers and impatient to be doing more than I could in that context, I thought I'd try to make a little film on my own. I've developed a storyboard and worked on images for the whole poem, but it's a demanding project to squeeze into a busy life and I've decided to do a George Lucas and start in the middle of my story. Eventually I hope to make parts one and three of Two Kinds of Time (Linear Time and When You Sleep) but for now, I have released Non-Linear Time on its own. 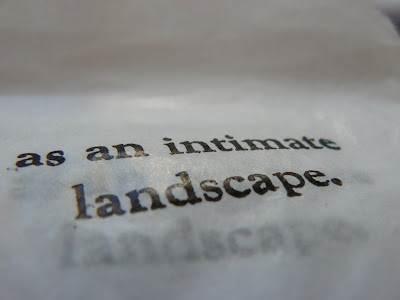 *There are a few nagging poems waiting in the wings, they know who they are!
Posted by Meliors Simms at 12:29 pm

Email ThisBlogThis!Share to TwitterShare to FacebookShare to Pinterest
Labels: Letterpress, Look what I made, technology, video poem

This is great. Well done - very cl;assy! A great poem artistically treated and very successfully. I love the way you concretize!

yes gorgeous! inspiring me to finish a similar project, thanks lovely.
xox

Meliors, this is wonderful. A really beautiful way to share your poetry and your printing.

Simply put "loved it". Have shared it around my team. Best little movie I've seen for ages!
:-) More please.....

That's gorgeous - I love the fragility of the paper and the wonderful palimpsest effect you get with the overlap of pieces.

Lovely Meliors - you are so clever - thank you for the great bookmaking class also !

Rats, I'm signed in as Rex again, but you know my real identity.

well done : ) the curvature of the text reminded me of one of my current fave toys which is a flexible mirror that i use with text projections - you can see a little movie of it here: http://creative-catalyst.com/mirror_web.mov - a bit longer than yours & not a poem, just random text that i was experimenting with. but since this movie i've done some other stuff with it in live performance & am about to do some more.
ALSO you should consider doing a poetry performance in UpStage, for our 090909 UpStage Festival - i reckon it would be cool : )