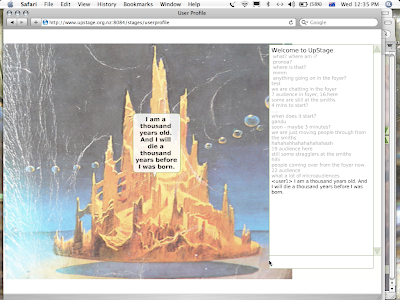 Click on the photos to enlarge, so you can read the text on these screen shots from the live performances of User Profile
I seem to have a persistent attraction to the steep learning curve. I am always putting myself into situations where I have to learn new things through total immersion in order to publicly achieve high goals quite quickly. And then, having (at least superficially) got the hang of that thing, I move onto the next challenge. I admire anyone who spend years mastering their craft or becoming expert in their field, but I have finally come to accept myself as a dilettante*. 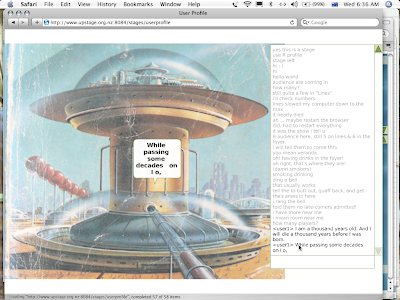 This 'insatiable craving for novelty' is one of the few things I have in common with the narrator of my poem, User Profile. The poem is the object of my latest dabble, in cyberformance, which involves typing in the lines of the poem which appear as text on the screen and in a computer generated voice, and clicking on different icons to change images on the 'stage', play sound recordings and move avatars around like actors. The audience can type in comments which also appear as text, but silently, so it's a very interactive form of theatre! 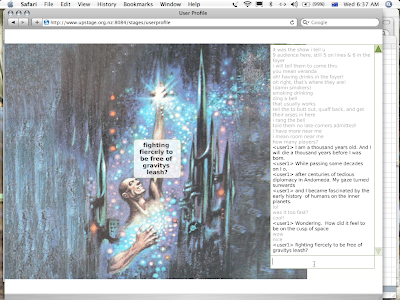 Earlier this week I did four live online performances of User Profile, as part of the Upstage Festival 090909. Online performance proved to be challenging, exciting and fun. Here are some of the screen shots from the performances. If you click on the photos to enlarge them you can read the text. The words in bold are being spoken by my avatars, and the light coloured words are the audience, commenting throughout the performance. 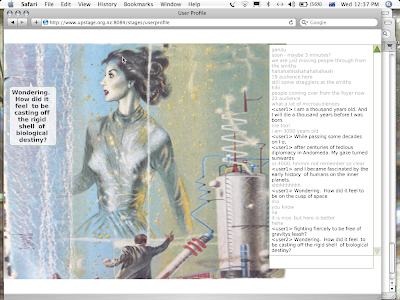 The images I used are all from my collection of vintage sci fi novels which I scanned and edited into backdrops and avatars. At the very last minute I had some help from Mem, to upload some sound effects (from FreeSounds), and the spooky space noises were a great hit. In fact I had great feedback in general, and even got asked to do an encore of my second show. Hopefully someone recorded one of the performances as video, that I can post/link sometime, so you can see and hear the whole thing. 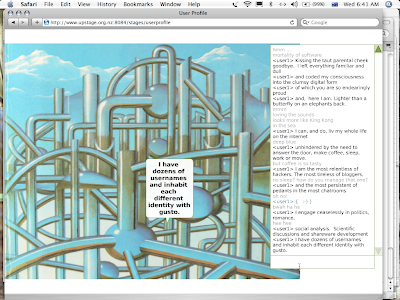 I also managed to see most of the other performances in the Upstage Festival, which were all quite different, although there was a tendency towards the absurd/dada/advante guarde, which made my little story seem quite conventional by comparison. 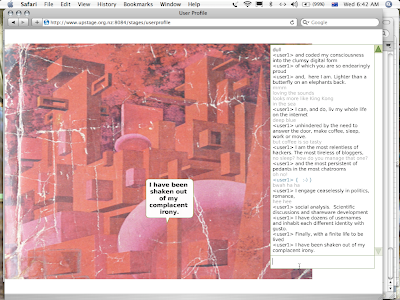 *Dilattante, is of course a pejorative term, like bureaucrat, another of my careers. Along with my attraction to novelty, I seem to have tendency towards despised identities such as wowser, feminist and greenie (though this latter has suddenly become fashionable which is quite disorientating).
Posted by Meliors Simms at 9:26 am

Email ThisBlogThis!Share to TwitterShare to FacebookShare to Pinterest
Labels: Look what I made, video poem

Wow Meliors - I would love to be able to view this if you do get a copy of it on the net.

Yes, I'd love to see it too. I hope someone videoed it.

the performance was screen-recorded BUT you don't want to see that; it's much better to see the live performance itself. meliors can do it again any time, & i hope she does ... meliors???? just let me know, i will promote it through the UpStage site & list. it's a great performance & it's not very long.