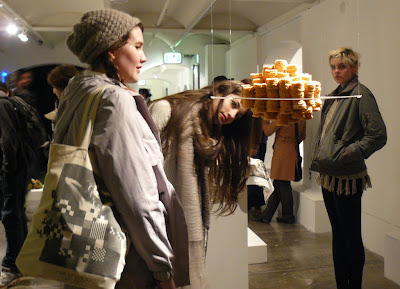 Opening night
I've just returned from a whirlwind four days, three nights in Melbourne. I installed Spoil at the First Site Gallery at RMIT, attended the opening and then flew home. To cram all of Spoil into the checked baggage requirements of Air New Zealand, some assembly was required in Melbourne, so I spent several hours in the gallery stitching the stacks of gold coins to the acrylic mount. 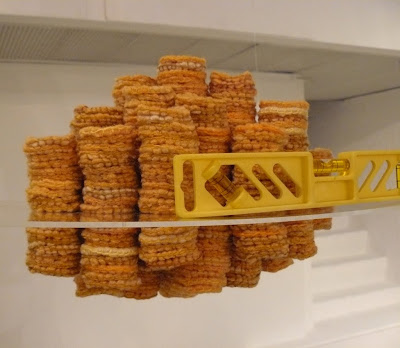 Levelling the hanging gold
This was definitely the loveable problem child of my three pieces. Lovely assistant curator Kellie Barnes (who also let me stay at her house), patiently spent hours up a ladder with her arms above her head measuring and tying, while I stood at the base of the ladder, supported the work and complained about my own sore arms. 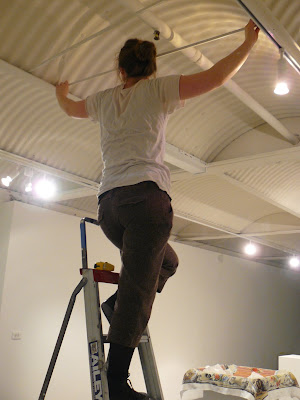 Kellie hanging gold
It was totally worth it, as the hanging piece looked exactly as I had intended and attracted a lot of attention at the opening. I was really delighted with how Kellie and Andrei Davidoff curated my installation with me, so that as visitors approach the main gallery down a long low corridor, they see all three pieces lined up. The gold hovering in the distance looks every bit as ethereal, science fiction-y and enticing as I hoped it would. The contrast between it and the low leaden weight of the grey spoil heap is balanced by the opencast Australia piece in the middle, which does not reveal much from a distance and required visitors to come close and lean in to see inside. 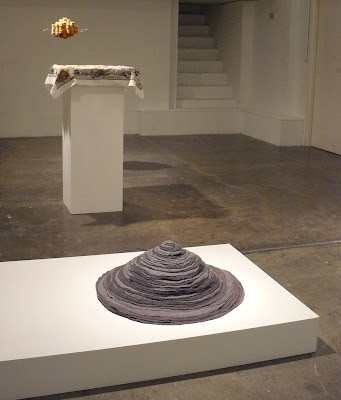 Spoil viewed from the gallery entrance
I enjoyed watching people engage with the installation at the opening. It seems to invite physical responses... not just your standard gallery looking pose. One guy couldn't resist touching all the pieces, but mostly people peered, bent, leaned, crouched and circled most satisfactorily. I tried to get people to tell me what they thought it was about before I answered their questions about my own intentions. Most people picked up the mining references pretty effortlessly, but there were also some food interpretations (cakes, kumara mash)- no surprise there!
Posted by Meliors Simms at 11:41 am

Email ThisBlogThis!Share to TwitterShare to FacebookShare to Pinterest
Labels: art, exhibiting, extraction, Look what I made, Melbourne, Spoil, stitching, work in progress